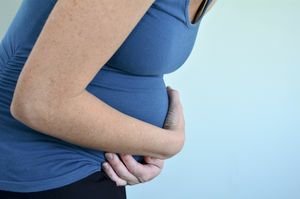 Miscarriage Support
A group for anyone who's suffered a miscarriage.

What’s going on with my uterus...

A bit of a long read, but please let me know if you have any advice or suggestions. Writing this on Mar 22’18, I just want my body to go back to normal so we can try again 😣

I had a miscarriage on Jan 29. I thought I was about 10 weeks but baby was only measuring about 5 weeks. I’d told my dr I wasn’t certain of my dates as my last period wasn’t exactly like the previous one, and I had hopped to get an early ultrasound. So dr sent me for a dating ultrasound, and there was no heartbeat. Went for additional bloodwork which confirmed my pregnancy hormone was dropping, and my dr sent me to the hospital to the Early Pregnancy department where a OB told me the pregnancy had stopped.

She gave me the option of a D&C or the misopropyl? tablets to insert vaginally to induce contractions to pass everything. I chose the tablets as we were told the ease of getting pregnant sooner again after using those was higher than having the D&C.

I put them in, Wednesday evening after our older kids were all in bed and about 5 hours later passed a very large clot with visible tissue (at 8pm, I inserted 2 tablets and then 4 hours later took the other two orally, upon the OB’s recommendation that if I weren’t bleeding yet, insert them as well, and if I AM bleeding, but it doesn’t yet seem “productive”, take orally. ...and then just take them orally anyways even if it did already seem things were being productive, as it helps to just clean everything out).

I bled all the next day (Thursday), sort of like a normal period bleed, and by bedtime, I didn’t even need a pad. Friday was pretty much normal and Saturday we went to a big climbing place with our kids and my hubby and I even joined in. I felt pretty much back to normal and thankful to have my hubby off work and all our kids home with us.

Sunday was normal until about 3pm. I began to bleed a bit while we were visiting at my parents’. I had mild cramps and it progressively got worse until I laid down in bed and went to sleep hoping I didn’t leak when I went to sleep (as there was quite a bit of bleeding, but in large clots). Woke up next morning and it had basically quit. Monday I was again pretty normal until about 1-2pm, and it started over again. Gradually worse bleeding (with enormous clots that I couldn’t even hardly walk around the house without having to go to the bathroom to let it pass out of worry that if I let it happen on my pad, it would just end up in a mess in my clothes-this part only lasted about a couple hours, and I didn’t feel faint or anything so I didn’t suspect that I was hemorrhaging) and cramping, until bedtime. Tuesday it happened once again only earlier again (starting about 11am) and lasted until about 8pm when I passed a really really big clot that felt like I was laying an egg...it was that large and pretty firm. I’d been in touch with the Early Pregnancy department as per my instructions upon discharge the week previous. I’d gone for my pregnancy hormone bloodwork on Tuesday during the day and she called me on Wednesday saying the numbers have dropped right to where they wanted them by now, so that this must just be how my body is dealing with the miscarriage.

After that enormous clot, everything sort of faded away, and just had spotting for about 2.5 weeks and I went two weeks with nothing. Then on about Mar 4th I’d woken up in the middle of the night because our toddler had woken up, and I realized I had blood running down my leg. Cleaned myself up and put on a pad, went back to bed. Next morning there was nothing, once again, but later in the day bleeding started again with enormous clots lasting a few hours, until just before bedtime. Same routine as the week after my miscarriage, and fear that this is how my period is going to be now until I can get pregnant again...huge clots that I can’t really do anything besides do a few chores around the house, then go to the bathroom. Every clot seems almost the size of my palm, but those huge clots only last a couple hours for the day and then they go away and I can function normally again.

The heavy clotting lasted about 5 days, and then I have still been bleeding since then, until today (Mar 22). The last two mornings I have had cramps before I’ve gotten up and they last all morning. Yesterday I’d hoped this was maybe camps coinciding with my cervix closing, as the bleeding was a bit lighter last night to the point that I decided I could probably get away with not using a pad. ...but woke up in the middle of the night again and went to the bathroom and once again, deep red blood when I wiped. 😣😣😣

So, cramps again this morning, and still bleeding, but it’s lighter than it has been.

No bad smell, no fevers, no chills, and I feel perfectly normal aside from the cramps that have been happening the last two mornings.

I intend on calling Early Pregnancy again on Monday morning, but just want to see if anyone else has experienced anything like this before.