I didn't exercise before or during pregnancy, but overall it went smoothly! FTM at 38+4

Sunday April 5th, I felt clumsy like I do before my period, dropping and spilling stuff. I ate multiple bowls of cereal for breakfast. I never eat cereal for breakfast anymore. I guess I was carb loading. 😁I felt an intense urge to climb a mountain, but my husband nixed the idea since we're only supposed to go out for essentials. I was so bummed. All day I felt like a black cloud was hanging over me. I even told my husband, "I feel like I'm having PMS!"

Well, seems like I kind of was. The next morning at

5am (April 6th), I got up to go to the bathroom and I felt a gush of liquid. I immediately suspected that my water had broken. I put a puppy pad down on my bed and researched what it feels like to have your water break. 😁I convinced myself it was just extra discharge.

At 7:45am, I felt another gush of liquid as I was putting my panty liner on. I was saying to my husband, "I think my water broke," and then another gush came and filled my panty liner. I went to put a pad on in the bathroom but I started spilling all over the floor and bathtub. It was pink tinged, so now we knew it had to be my water.

I called my obgyn office and they said to come in at 10:45 to confirm if it was my water.

At the doctor's office, the nurse practitioner performed three tests to see if it was my water. She checked to see if there was a pool of fluid around the cervix; she tested the paper to see if it would turn blue; and she dried some of the water to see if it would fern up. All three tests confirmed that my amniotic sac had ruptured. The NP told me to check in to L&D. I asked if I should go home to labor, but she said she wouldn't recommend it due to the risk of infection. Plus with Covid 19, she said they would probably want to get me in and out of the hospital. She said, "They're not too busy right now so that's good." I'm glad I did go in and get a room, because that quickly changed! They became so busy! It was a full moon night on April 7, so that was the joke going around.

I came out to the car and told my husband. We drove to Chick-fil-A for one last meal before I needed to go on a liquid diet.

We checked in to L&D at noon on April 6th. The nurse hooked me up to an IV. Honestly, the IV was one of the worst parts about the whole delivery process! I couldn't move much or it would hurt and my hand would start bleeding. Ugh!

By 5pm at 20 mg of Pitocin the contractions were pretty intense. I labored until about 6:45pm when the doctor checked me again. I had progressed from a fingertip to a cm. 😏

I continued laboring into the night. My husband helped me every time I had to use the bathroom, because I had to drag my monitors and IV along with me. It was getting really tiring. My doctor told the nurse to only keep me at the maximum amount of Pitocin for 4 hours, but I was at the maximum for more than 5 hours. I was exhausted, nauseated, and in so much pain. The doctor checked me around 1:30am, and I was still only between 2-3 cm dilated and no more effaced. I was done. They turned the Pitocin off at 2am, and I asked for the epidural at 3. At 4:35am I finally got the epidural, and it was sweet relief immediately! It was also nice not to have to get up to go to the bathroom once they put the catheter in. They gave me Cytotec to try to soften my cervix and they said it might make me dilate also. I took it under my tongue at 5:20am, and fell asleep. I woke up at 7 and remembered my pill. I thought it would have dissolved, but it was still under my tongue! I quickly swallowed it. 😁

I woke up because I was shaking uncontrollably. My husband called the nurse, who said it was a normal side effect of the epidural. She brought me three heated blankets, which helped quite a bit.

At 7am on April 7, the shift changed and I got a wonderful nurse! Also, the new doctor was my favorite female obgyn in the practice. Together these two are an awesome team, and they assured me that they would do everything possible to help me dilate so I could have a vaginal birth.

At 9am they checked me again, but I had not progressed at all. In fact, this doctor said I was probably only between 1-2 cm dilated. At 9:40am we started the Pitocin again at a 4. This time they increased it more gradually, about 4 mg every hour.

At around 1:30pm, the doctor came back to check me. The doctor and nurse had a bet going on. My nurse bet $4 that I would be 7cm dilated, but she lost the bet. The doctor said I was about 75% effaced now, but still not dilated any further. 😩

The nurse assured me that I would know one way or the other by the end of her shift at 7pm if I had to go for a C-section or not. But she was determined to do everything possible to help me avoid a C-section. She used peanut balls to change my positions every hour or so.

Around 4:45pm, the nurse got really impatient waiting for the doctor to check me again, so she decided to do it herself. By the look on her face, I didn't think it would be good news. She asked, "Who's your favorite nurse?" I said, "You, so far." Then she said, "You're a conservative 6! Maybe even a 7! Yay! We did it! I'm going to give you a hug, even though I'm not supposed to because I'm so happy!" I was so excited to know my body could dilate, and I would be able to try for a vaginal birth. This time they had only increased the Pitocin to 24, so their slow and steady method worked better than pumping it up to the maximum.

Around 6:45pm the doctor checked me and said I was at 9.5cm. She said I could start pushing in an hour or so.

At about 7:45pm a new nurse got me set up to start practice pushing. She had an assistant, but her assistant apparently got called to help with another birth since there were three of us ready to deliver at the same time. 😛 So my husband held my other leg, which was actually really beautiful. 💖

We didn't really get started pushing until 8:20, since the nurse had to set up the room by herself and put on extra gear due to Covid 19.

Around 8:40 the doctor came in to check our progress. She helped with a few pushes and then said, "I need to get all my stuff because you're going to have a baby!"

She came back with her N95 mask on, a table with all the instruments, and two women who stood ready at the warmer. It was go time! They turned off the epidural so I could feel the contractions to know when to push. They felt like strong period cramps.

The doctor encouraged me to touch my baby's head. It was slimy, and I didn't like it honestly. 😵I could see my baby's head in the reflection of the doctor's face shield, and that gave me motivation to push harder. I only hesitated when I was crowning, because it felt like my urethra was being torn apart! The doctor said, "This is the ring of fire they talk about. You just have to push through it." A few more pushes and her head was out! One more push and the rest of her body slipped out. I looked at the clock, and it was 9:05pm. It was the moment I had dreamed about after watching so many episodes of One Born Every Minute! They put her on my chest and rubbed her until I heard that first cry! 😍 I thought I would cry because I have cried so many times watching those videos, but I didn't. 🤔

The doctor then delivered my placenta. I didn't even have to push for that. She said I only had a minor first degree tear, which she fixed with one stitch. Such an amazing and positive experience! I am so glad I got the epidural when I did, even though I wanted to be at least 5cm dilated before I got it. But I never would have had the energy to push if I hadn't been able to rest all day due to the epidural. The only downside was it made me extremely itchy.

The ladies at the warmer announced her weight as 6 lbs 2 oz and height as 20 inches. (At her one week appointment, she was measured as 19 inches.) I was surprised at how tiny she was since I'm 5'6" and my husband is 6'2". 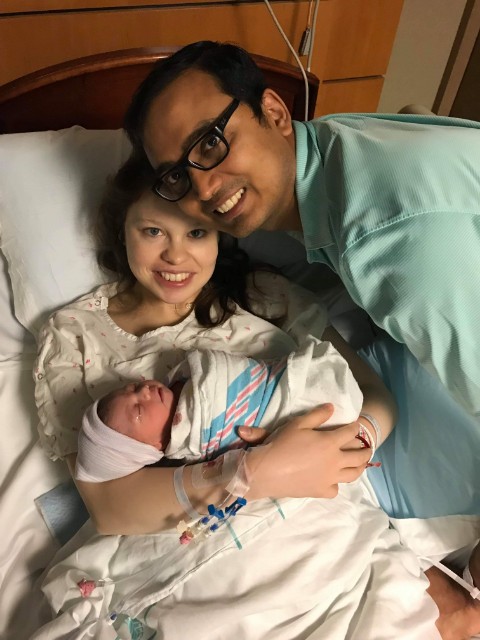 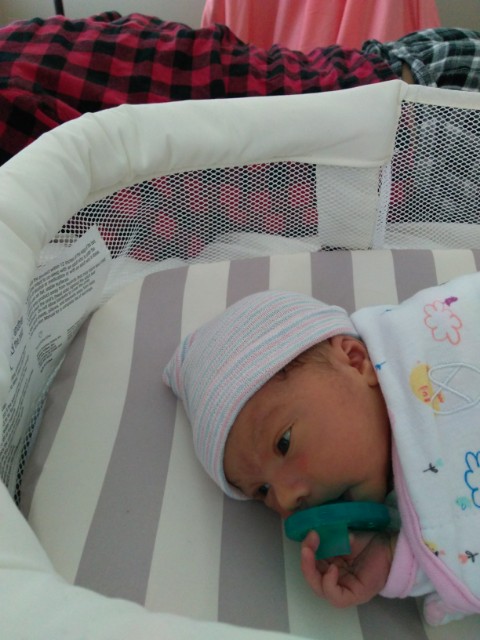 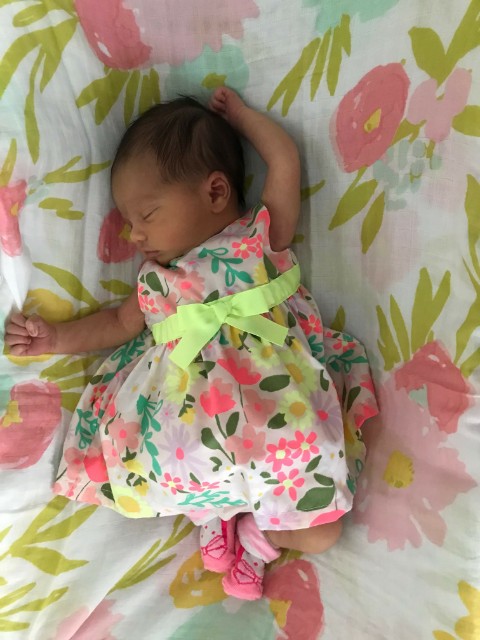