After a very rough induction, that involved the baby’s heart rate going up and down and the nurses having to turn the pitocin on and off because it was making the baby’s heart rate to be even worse. I threw up spontaneously and violently multiple times over the course of nearly 12 hours, every nausea medicine they tried to give me to calm it only seemed to last a few minutes and then start again. My pulse and blood pressure dropped very low several times and at one point I apparently passed out during one of those times. I don’t remember that part. They flipped me every direction imaginable every 10 minutes over the course of those almost 12 hours because the baby wasn’t happy with any of the ways they had me lay and the heart rate kept flying up into the 190s and then back into the 120s immediately after a contraction and was all over the place.

I arrived at 8pm the night before and was at 2 1/2 it took until the following afternoon to finally make it to a 3 and then around 4:50pm I was still having a ton of pressure but had just reached a 5-6 and as had been the case all day every 30

Minutes they once again said ok the heart rate is all over the place still so this is the last try and if it doesn’t settle down in the next few minutes we’re going to have to turn the pitocin back off and we’ll then be looking at a csection scenario because for safety reasons we’ve already had the heart rate going up and down for a while and it’s not getting better with positions or fluids so we have to go with the safest option. They left the room, 7 minutes later I had tons of pressure, could barely talk, the nurse came back in the room, I told her best I could I felt my bodya was there. Baby was born about 10 minutes later. From the long induction and the starting and stopping and the hours of nausea plus no sleep I was physically exhausted by the time it was time to push but we managed to get through it. I thankfully had no tearing or stitches.

Exactly a month before my birthday. Just wanted to take a moment to update for those that might have followed along.

*Fun Fact- 3 days later after having severe cramping that left me laying on the floor unable to get up I called oncall to see what they thought considering I’m on blood thinners etc. they had me immediately go back to the emergency room to check for another dvt/embolism. After many labs, ultrasounds, ct scan, etc everything came back negative for dvt (thank god!) but showed it was kidney stones and that I had passed one apparently hence the pain and it was infected and I had several other tiny ones. Not fun, had no clue. Still finishing up medicines and antibiotics and back on my blood thinner injections.

Here is a picture of baby for anyone that was interested or followed. 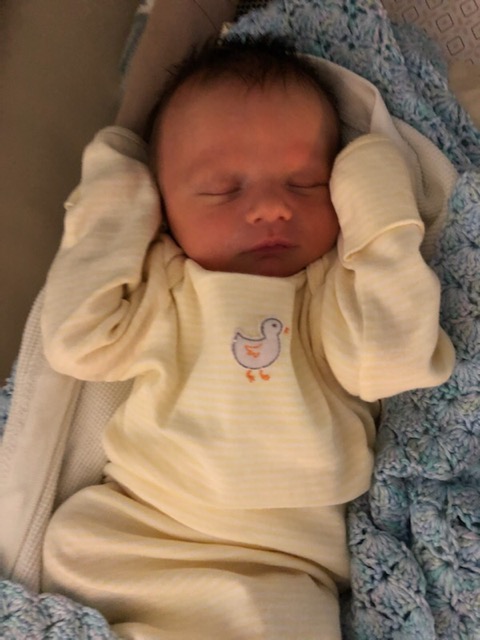