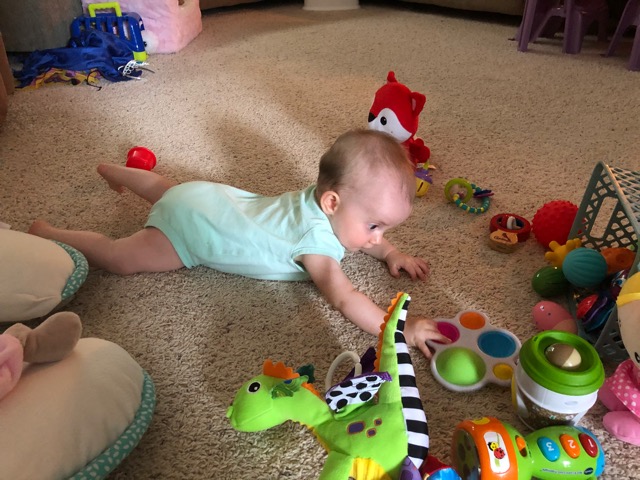 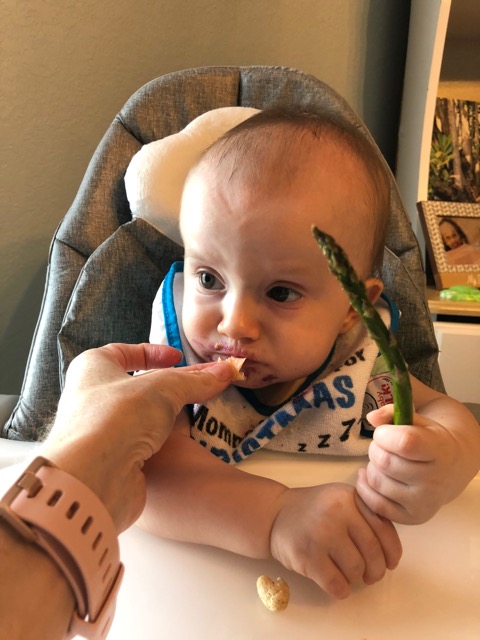 Little lady is 8m. 1) She is stuck in the above belly position... she refuses to push up passed her elbows and has never gotten her knees under her. I can force her to do both but she doesn’t like it and refuses to bear weight on her arms. I’m starting to really worry about that . She doesn’t scoot either way or attempt to army crawl. She’s done a 180 few times but that’s rare. She doesn’t mind being on her belly, but typically flips to her back when she’s done. 2) She loves to eat, but refuses to self feed. I can put anything on her tray and she just picks it up and looks at it. I have to hold it in her mouth or she just holds it/plays with it and never brings it to her mouth. I’ve tried doing hand over hand and she’ll just drop it. It’s like she has zero connection of holding it and bringing it to her mouth. She hates those rice rusks. I gave her a waffle this morning and wouldn’t even put that towards her mouth. Her fine finger control seems fine. She can pick up anything I give her... just refuses to bring it to her mouth. Above photo was tonight- salmon and asparagus, and then purple sweet potato I puréed. 3) She also only babbles a, h (like ahhhh) and m’s. No b’s or d’s. I’m finding myself worrying a lot lately...... She can sit mostly unassisted and loves to walk with our help. She doesn’t pull herself up to anything but can pull herself to stand with our fingers. Sorry this was so long 🥺