I’m nervous because my past

Leah • Tue, Dec 01 • I was diagnosed with Graves’ disease and had my Thyroid removed January 2021. I had calcium issues post surgery and have come a far way! We’ve gone through three miscarriages and can’t wait to have our rainbow baby 👶🏼 this step just brings us closer to t

I’m kinda nervous for my “period day” if it hasn’t already pst ! (I’m pregnant) Glow is predicting my period to be on the second, and OVIA says the 30th (today) either way I’m pregnant I took a test (I thought I was late because I didn’t track this month lol) and I got a positive! I was not trying this month and we’ve been trying almost TWO years! I’m nervous about expecting my period to show although there’s no real reason for me to feel like that. I haven’t bleed, cramp, spotted, or anything and have terrible morning sickness and sooo much CM. I’ve had two miscarriages in the past and I’m kind of expecting AF to show up as a miscarriage. I don’t know if I’m technically “late” yet. My period goes anywhere from 24-29 days typically with the occasional 30 day cycle. Either way I know I’m pregnant just praying she doesn’t try to show up. I have Graves’ disease and I’m getting my prescription started tomorrow do you think it’s to late ? I have NO symptoms of a miscarriage I’m just nervous for my “period” day if it’s not already past. What do you guys think? I’m 4 weeks and 2 days according to glow. 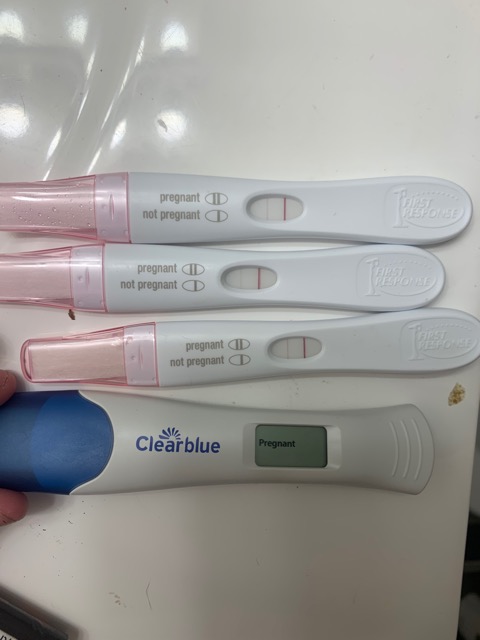 These were over two days *

Top two are from the first day I tested*

Bottom two are from the second day I *