So on Oct. 10th I went in for my routine 36 week check up. The nurse took my blood pressure and it was 151/82. Ten minutes later my doctor came in the room and took it again. It was still high so she said she had no choice but to send me upstairs for overnight monitoring because she suspected preeclampsia.

At 10am on Oct. 11th my nurse came in and told me that my c-section would be in 1.5 hours because it was indeed preeclampsia. Both babies were already anemic due to me becoming RH sensitized in my first confirmed pregnancy so that combined with preeclampsia was enough to convince the high risk doctor to go ahead and approve the c-section. It took them 6 tries to get my IV in and I was dehydrated because they forgot to hook up my IV fluids.

At 1:21pm I heard my sons first cry and at 1:22pm I heard my daughters. During my c-section they discovered I was actually in labor. I thought it was Braxton Hicks contractions. I was 3cm dilated and fully effaced. My bladder had also prolapsed which I wasn’t aware of either. I had to have 3 different medicines to stop my vomiting during the c-section and my husband had to keep suctioning out my mouth to keep me from aspirating. They also had to give me anxiety meds to finally calm me down before it actually stopped completely. (By the way, why did no one warn me about the afterbirth shaking??? I couldn’t stop shaking for 2 hours!!!)

At 5pm my nurse came in to warn me that the NICU nurses would be coming in to take my son and possibly my daughter too but she wouldn’t tell me why. Ten minutes later they took them both. My daughter spent 7 days in the hospital for anemia and extremely high bilirubin numbers. She had to be on triple photo therapy, have IVIG, and be hooked up to IVs the entire stay. My son spent 10 days in the NICU for anemia and critical bilirubin numbers. He spent 9 days doing photo therapy, had to have IVIG, had to have a feeding tube put in, had to have an IV in his belly button, had to have blood transfusion, and had a total of 3 IVs put in his head. It took them 10 days to get it under control. He’s been home for 8 days now and still have to have twice weekly blood work. He is still at risk for being hospitalized again which terrifies me so I will continue to enjoy every moment I have him home. (He has RH induced hemolytic disease of the newborn.)

In the end, I would do it all over again. I love these beautiful angels more than anyone or anything else in this world. I cannot believe they are mine ❤️😍❤️😍 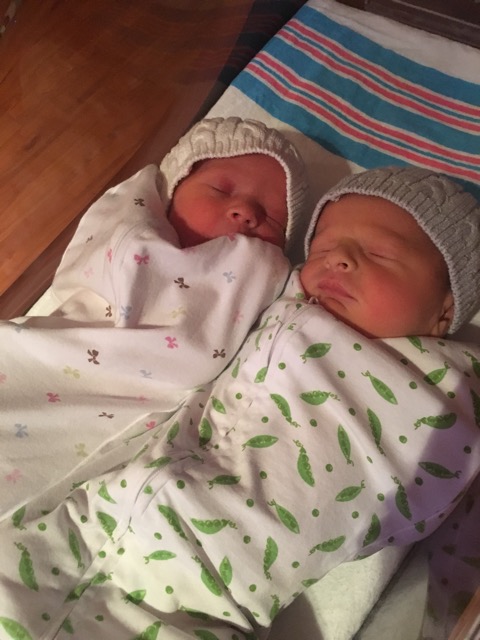