So back story real quick. I'm 18 in college and so is my friend. Earlier yesterday I was talking to one of my best friends (female) and she's not big on social media but she said she wanted to give Snapchat a try because of the filters. So okay I gave her my username and told her to add me whenever she got her set up, but she said it would be a while because she had classes and had to help with some church things.

Well, I had just gotten out of one of my classes and checked my phone and someone added me on Snapchat. The username was just one letter and a couple of numbers and it was the same letter that my best friend's name starts with so I thought it was her adding me. So of course I added back and once I added them I didn't even have a chance to ask because this happened: 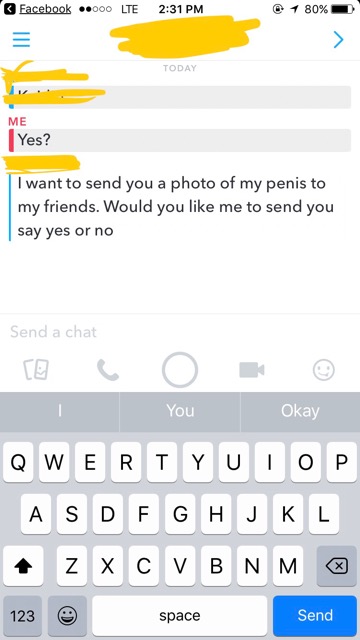 UMM?? (I scribbled out username and my name, which was the first thing he messaged me was just *my name?*.) And then THAT happens. I've never had anything like this happen to me before and honestly thought these things never happened to "regular" people... So I freaked out, didn't answer, and blocked him as soon as I could. I told my friend about it and she hasn't even set up her account yet because she was busy at the church. So that was just a really odd coincidence. And I kind of feel gross from it? I don't know maybe it's just where that's never happened before. Just figured I'd share. Never accept requests from usernames you don't know because apparently they can be creeps🙄🙄