So in my very small town, there is a big stink right now because supposedly one of the middle school teachers was caught sending inappropriate Facebook messages to a student. The thing is, the student who took a picture attached below claims that she took it at football game over the girls shoulder. The girl who took the picture and turned it in, is known for being a drama starter and some of her friends are claiming that she’s making the whole thing up and fabricating the photo somehow especially because she’s responsible for the photo being sent to all local middle school and high school students. (Yep. School wide, they all have seen it)

However, the photo seems to be incriminating as it looks like a genuine Facebook messenger account. But my how do you take such a good picture over someone shoulder? Where’s the dudes hand? Why is it so straight? Why is it so dark when bleachers have lights?

Also, the really nasty captions on the photo make me think that students just want to see him fired. Then again middle school students also believe everything they see it face value so that might be why they’re so angry. That’s all the information I have right now. Police and the school are currently investigating. 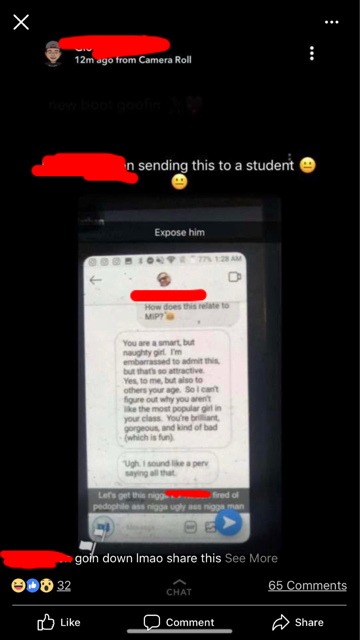 Blurred out the teachers name.