My cat recently had blockage surgery. Long story short, he couldn’t pee & had to get emergency surgery. They removed a giant kidney stone & his urethra isn’t blocked anymore. He has gained 2 pounds in one month & he is much healthier & much more active!

The little asshat keeps waking me up during the night. We keep our bedroom door shut, but there’s a lot of play with it. He rattles & pounds on the door anywhere between midnight-4 am.

I googled it. Articles say he’s either hungry (which he isn’t because all of his food is full when I check), sick (he isn’t, he just had a checkup on Friday. His health is perfect), or BORED. I cannot believe this cat is waking me up because he’s bored.

The articles suggest NOT opening the door because that’ll just reinforce him to keep doing it. I have to barricade the door so it doesn’t move when he pushes on it & I can’t hear it.

My husband suggested leaving our door open so he can walk in & out when he pleases, but every time he’s in here, he scratches on the box spring & wakes me up anyways! Plus I’m due in mid July & I don’t want him getting used to coming in here & making noise.

Has anyone had this issue with their cat?

His name is Ninja-it’s very fitting. 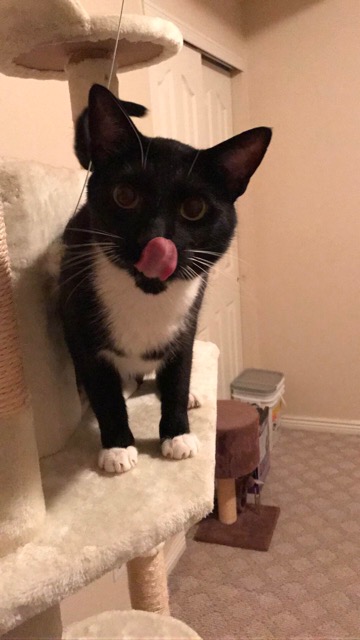