I have been with my boyfriend for a year and a half.

My mother and I have never really had a good relationship, she was abusive and manipulative.

She knew as soon as I started dating him I would move out and my $1,200 plus a month (paid every other week about $650) for my share of the bills would be out the window.

So because she knew me and my money were leaving, she never tried to get to know him.

She continuously insults him, and has put in her best efforts to break us up. (Accusing him of cheating, saying he isn't at work but with another woman, how he cannot support or love me as much as I need.)

She has used this as an excuse to try to get me back in her life.

She wants me to visit more but I do not feel comfortable visiting because she has been so abusive in the past. I'm convinced I lost my pregnancy due to her kicking me in the stomach.

(She didn't know I was pregnant or it would have been so much worse.)

I do not want my boyfriend around her because she is so rude to him (she thinks it's funny to say he is stupid, fat and ugly, and refuses to believe I actually love him and am only using him as a way to not live with her.) but she won't lay a finger on me if he is there.

She says I should respect her by not getting engaged or getting pregnant because it won't be fair to her because she will die before the child grows up or I get married.

I say *says* earlier because she has had a history of lying through her teeth to get what she wants. Just earlier today she said she broke her shoulder so she needs my medication that help me through recovering from surgery.

I told her repeatedly to go to a hospital and she admitted it's probably not broken.

Do I put my life on hold for the off chance she is dying?

Do I visit with my boyfriend and put him through her verbal abuse?

Am I a bad person for not believing her and thinking she just wants to control my life again? 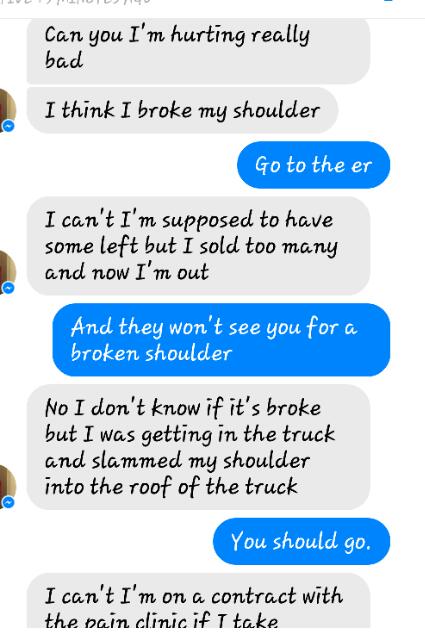