This kid will not sleeeeppp 🤦🏾‍♀️

I’m losing my mind (and my patience). my daughter will be 15 months on October 5th and for the past week to week and a half, she just refuses to take ANY of her naps and when she does sleep after tossing and turning and talking for 30+ minutes, she sleeps for maybeeee an hour (most often 40-45 minutes).

Now, before you say “well maybe she just doesn’t need day sleep” or “maybe her awake window isn’t long enough and she’s not tired” or “maybe she’s not stimulated enough when awake”..:::this girl neeedsss 2-3 hours of day sleep so not taking a nap is out of the question. Otherwise night time is a mess because she’s overtired. She shows all sorts of sleepy signs (rubbing her eyes, yawing, and fussy plus it’s usually around the recommended total awake time that I put her down). And lastly, we are very active. She goes to the YMCA daycare for an hour every morning and plays with the other toddlers, we go to story time after on mondays, music makers on tuesdays, wednesdays we relax, Thursday’s she has her montessori school and fridays I always find an outdoor activity for us to do. She is plenty stimulated. She doesn’t watch tv (and if she does, it’s not for more than a few minutes so I can do something.)

Ughhh... To add on top of it, she has taken to waking up at 5am because she’s so overtired. Right now I’m watching her fight her second nap AGAIN. She only took a 45 minute nap this morning!! Once she started fighting her second nap and taking a short first one, I thought maybe it was time to transition to one nap but I would let her kind of decide whether or not she needed a second nap based on sleep ques and the length of her first nap. Now that’s she’s waking at 5am, a second nap is a must because she now needs a first nap super early! I’m beyond frustrated right now. She’s becoming very fussy and clingy when she is awake from the lack of sleep. It’s really starting to drive me crazy. I just feel like she’s in an endless cycle of not getting enough sleep. Anyway, idk if anyone can relate but yeah. She’s also at the end of leap 9 so maybe that’s it. All I know is that I’m one skipped nap away from losing it.

Today I took her to the library hoping she would burn some more energy there but nope... she’s not having it. 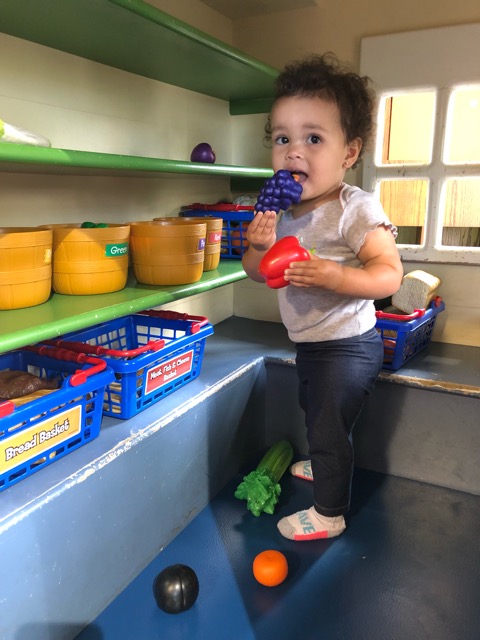