So my husband and I just got home from the grocery store, where his mom works. We parked off to the side of the parking lot a bit, and his mom's car was there. He parked right in front of her car, like both cars facing each other. I asked him why he parked with her car right in front of ours, instead of one of the many other spots near by where he could have just pulled through, that way he won't have to back out of the spot. He kind of had a puzzled look, and said "huh, I don't know". I made a little joke about it, and we head into the store.

We are in there for about 45 minutes, saw his mom a couple times, and went out to the truck. When we got there, our truck was moved over one spot. It took a second to realize. My husband was like, "wait, didn't we park in front of my mom's car?". Uuuuhhh, yeah! We had a whole little conversation about it!

His mom was in the store the entire time, she did not go move her car. Even if she had, over one spot? No. I had told my husband to move over a spot when we parked, that way he could pull through, but he didn't want to, so he didn't.

There is no explanation! My husband is convinced it was a glitch in the matrix. So of course that lead to him going on about that and all the stories he's heard/read about, and his own "experience" (which I'm pretty sure I debunked). I was not familiar with the matrix, never seen the movie, just heard pei ple reference it. He explained and now I'm weirded out. It makes sense!

I'm going to leave a little diagram, because I'm a visual person lol 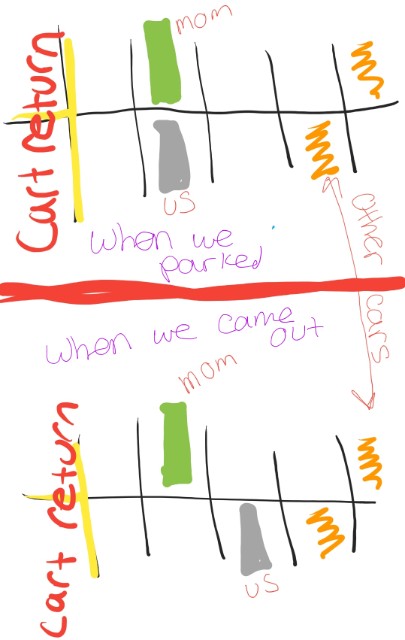 Like I said, his mom was in the store the entire time. My husband and I were together the entire time, so he did not move it (not like he would go move it just to prank me anyways). I remember taking notice of where the cart return was and the other cars parked near by before and after we went into the store, part of me making a point that he should have parked in another spot.