Hey y’all. I’m just curious on what y’all think I should do.

According to my app I am 5w6d and my clinic referred me to an OB last week and the OB wanted to see me pretty much immediately.

So I went and had the first ultrasound done. Simply for me because I was having spotting and I wanted to ease my mind.

Mind you, they didn’t do a vaginal one simply because the tech told me she wasn’t going to do one so idk how she expected to see anything with an abdominal one.

I went in today thinking I was going to have more bloodwork done but to my surprise they wanted to do another ultrasound. So I kept thinking maybe they’ll actually do a vaginal one since I’m still so early.

Well,nope! The tech refused to AGAIN and told the OB she can’t see anything for the second time now. So the OB told me that I should expect to miscarry soon because it seems nothing formed. He wants me to come in once a week to make sure my levels are decreasing.

So I asked him, “What If my levels keep rising?” He said if they keep rising then they’ll do another exam and preform a d&c.

Idk, I feel like if I was starting to miscarry then I would be cramping and bleeding ALOT (I’ve had some spotting since I’ve found out but no clots or anything), and my levels wouldn’t be going up anymore AND I wouldn’t be getting blazing positive tests.

Should I go get a second opinion before accepting that no baby formed at all and my body just “magically” prepared to carry a child that never made it anyway?

When did they do a vaginal ultrasound on you?

Has a tech ever denied you a vaginal one?

So, I called my primary doctor and let her know what was going on with the OB her office referred me to. She scheduled me to come in Wednesday for a pelvic exam and if she finds that to be normal she’s going to write me an order to the hospital and have them to a vaginal ultrasound. The OB office never even gave me a pregnancy confirmation paper at my first visit to take to the WIC office and Medicaid; so I’m hoping that that hospital bill will be covered by a good bit with the insurance I already have.

I’ve already accepted that there’s nothing there and I feel numb to the situation. I know I should feel sad, considering how excited I was when I found out but I don’t feel anything. And besides my boobs hurting like hell I don’t feel pregnant. (This is my first pregnancy so I’m not sure what being pregnant feels like in total but I just don’t feel it.) I’m not bloated anymore like I was when I found out. I just feel like maybe the tech is right but I wanna be certain. The OB suggests we try again in 4 months but we weren’t actively trying, it just kind of happened. I’ll most likely get back on birth control and try and get life back to normal if this baby doesn’t make it. I just feel like if this is true, I can never trust a pregnancy test again. Here’s my progression. I know lines don’t always mean a healthy baby but I had hope. Not so much anymore :/ 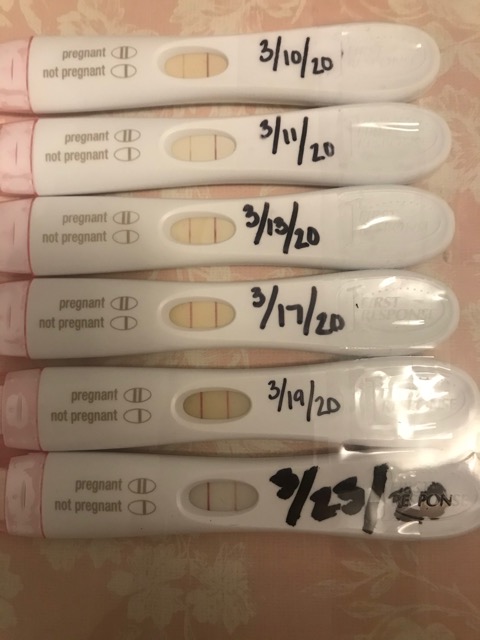