I am using this polyherbal cream which treats both vaginal yeast infection and BV. It's been two days since I started using it and I notice a slight difference. I started having this problem 2 months ago when I shaved completely down there with body soap as foam (I now know I shouldn't have) and had sex with my then bf, on the same day. That night and a few nights after that, I had a lot of itching (esp at night) so I thought that it was because of shaving. Few days later, I had my period and then one month from then, I just had mild itching and small clumpy discharge with no smel.. I didnt do anything about it as it was so mild that I thought it would go away on its own.

I also didnt take care or my vagina well because I used hand sanitizer on my hands a lot of times instead of water before masturbating. Then next month, my period came one week late. After that, the same mild symptoms and I started applying coconut oil down there as I heard it was good. This month, its been 2 weeks late and I did not get my period. I'm worried. I smelt my discharge and it started to have a faint egg/ rotten egg smell. Its faint because I can only smell the discharge when I put it close to my nose. My yeast infection could have turned to BV after using the coconut oil?

Now, Im using this herbal cream and from the 1st day I use it, I saw large white chunks of cottage cheese discharge coming out, and it had that faint rotten egg smell. On the second day of using this cream, the chunks got smaller but they are still there and there are very tiny white particles in my urine. Is it getting worse or is it flushing itself out? Im also drinking a lot of water these days.

So does yeast/BV infection get worse before better and does it cause any delay in periods for anyone here? I know its been two months and I still havent been to a doctor but there are a lot of covid cases in my area, esp in hospitals so I am trying to avoid first. Also this cream is supposed to be used for two weeks and its only been two days since I started using it so if no improvement in a week, I will defenitely go. 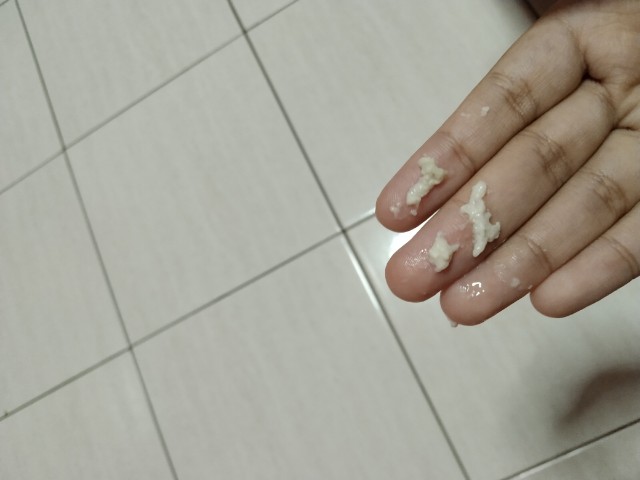