My boyfriend gets mad at the smallest things. I was out today shopping and running errands and I come home to eat, and then clean up a bit before I go to call him. I’ve been texting him and sending him pictures all day. Apparently I can’t do anything without him having a flap attack on me. Did I actually do something wrong or is he just being childish? Kind of upset he didn’t even say I love you back lol I guess this Is what I get 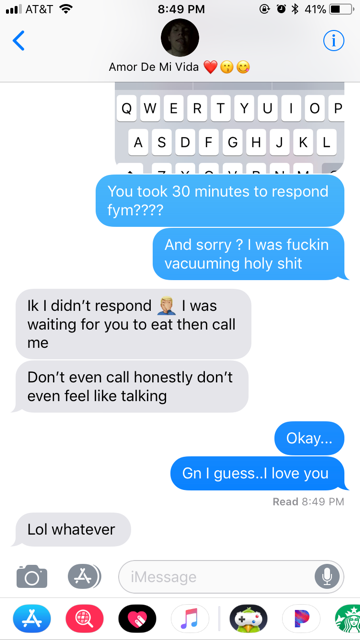 EDIT*******Clearly i didnt explain well enough. This screenshot shows after I was trying to fix the problem. I was apologizing and reasoning with him. I was explaining to him that I was just eating and picking up the house. He was trying to instigate a problem and that’s when I got upset. He told me I took to long to call him and I was calling out on his hypocrisy in the first message I sent in the screenshot.