In my international human rights & law tutorial we discussed this article in regards to rights and dignity.

IMO no one deserves to die over something like this.

I want to approach this from a perspective without personal opinion.

Who is in the wrong?

I’ve been studying criminal justice for the past 2 years at uni but this class focuses heavily on human rights/laws.

It is debated often that if someone comprises your dignity/rights (as everyone by virtue of birth is guaranteed equal dignity and rights) then you or an official has permission to in return compromise their dignity/rights.

Without context, students agreed that yes it was ok to revoke someone of their rights/dignity if they had done so to another (eg. If a terrorist has committed an act of terrorism then officials can hold him in detention and interrogate him, invade his privacy, freedoms of movement etc)

However when we spoke of this article in particular, students changed their side of the argument.

So in this case, the boy compromised the club promoters dignity, and freedom of liberty/association.

In return the club promoter has removed the schoolboys right to life.

This was perhaps something not intended, he may of just wanted to hurt the boy physically - if the case then that would have compromised the boys right to freedom of cruel, inhumane, or degrading treatment, as he has assaulted him (only hitting him once)

I don’t believe the the club promoter intended to kill the boy, and no evidence pointed

to it as he was convicted of involuntary man slaughter, but he did intend harm.

If the boy had not died, there would have been zero consequences for the boy. But all for the club promoter.

This kind of capitalist statement that the boy has made is exactly what can provoke people to feel as if their dignity/worth freedoms are less important or not of as much value as those who are wealthier in positions of advantage.

In saying that, this boy was within his freedom of expression to tell the club promoter “you’ll work for me one day”.

This is where it gets messy.

and some of course saying it wasn’t worth ending his life over.

But the question my teacher posed and the question I’m asking today, is “why does death of the perpetrator make him the victim as he was actually the one who instigated the fight?

Why is his right to live more important than another’s right to liberty and freedom of limitation? 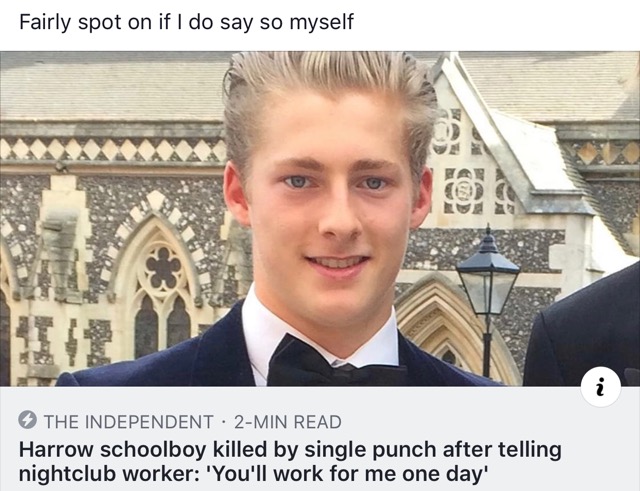