Am I the only goin through this right now?

My husband and I do. It get along. We’ve been together for 4 years and it seems at this point we are both here for our daughter only, we’re both scared to break our family apart. I know that we love each other but we have lost respect for each other as well. I resent him for some things and he has anger issues. Our relationship has gotten so bad that the other day he pushed me to move out of the way as I was blocking him and I ended up dragging him of how furious I was and we kind of got into a fight, no punching just manhandling each other. We acted as if nothing had happen the next day although our fight was so bad and I’ve never ever in my life have physically fought my husband until the other day. He was shook, so he wrote me this later last night to which I asked why he had wrote it and he said he was just feeling upset about everything. I’ll attack the picture below.

Tonight I got out of the shower and he was already in bed. I had just got out of the shower with my 2 year old and she was screaming her head off. She wanted her dress. I was trying to settle here in but she was not budging and he kept asking me what was wrong her to which I caught an attitude with him because I was just frustrated with my daughter. He gets mad and tells me why am I getting loud with him he’s just asking me and I tell him “you keep asking while I’m telling you she’s just throwing a tantrum”

Well, my daughter doenst stop so he furiously gets up and asks what she wants she says her dress. He then proceeds to say “I’ll get it for you babe, your mom is a bitch” and I literally just stood there dumbfounded because he just wrote me a letter but now he’s back to being verbally abusive. I don’t know what to do, how he’s sleeping on the couch again and I just left his ass there.

Here’s the letter he wrote me. 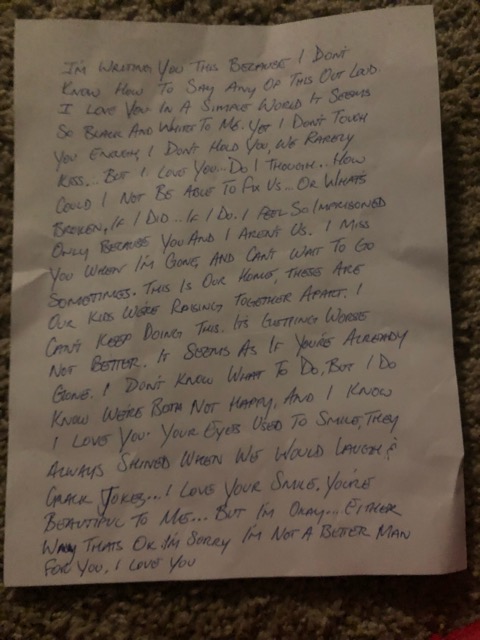