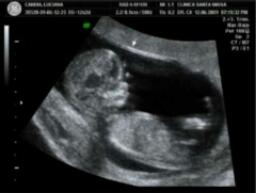 Ultrasound markers for Down Syndrome.

I had an ultrasound done at 17 weeks. Tech said I was on the cusp of 16 and 17 weeks, so I was still too small for her to accurately analyze the baby's development. She wants me to come back in about 2 weeks, before the baby gets too big.

I do remember her saying that there was a "hole" in the bowel. Not sure if those were her exact words but she did also mention that they usually go away within a couple weeks/it should be gone as I get further along in my pregnancy. She didn't dwell on it and neither did she sound too worried.

I remember seeing the side of the baby's face, which she pointed out, including its' nose. I'm not sure if the ultrasound tech had actually mentioned to me anything at all about the baby's nasal bone.

But the doctor did. I think he said that it looked small. He told me that both markers (nose + bowel) are common and usually pass, but the fact that there are 2 markers rather than just 1, it could mean that my baby is more at risk. I remember him saying that the 2 associated could represent Down Syndrome.

I'm still trying to wrap my head around this. Shortly after he told me, I got blood work done. Won't be hearing about the results until the 21st. He also ordered another ultrasound (sooner than the 2 weeks that the tech specified) with someone who better specializes in that area... Sorry if this is long, but as you can probably imagine I can't stop thinking about it. I will definitely keep you updated.

Have any of you ever experienced having one or both of these markers on your ultrasound?...