Boyfriend Being Distant. Did I handle it okay?

I have been in some really bad relationships. Guys who verbally abuse me by telling me that I'm annoying, ugly, stupid, etc. I'm 21 and I tend to talk like an old person and say things like "cool beans" or "that person is a hoot" which a lot of guys find annoying or stupid. I also like to wear Disney shirts or shirts from Hot Topic and I was told by one ex specifically to not wear those kind of things around him anymore because he feels like he's dating a child 🙄

My current boyfriend loves me for me and accepts me for all of my weirdness which is absolutely amazing. He suffers from anxiety, ADD, and depression (currently trying to find the right medicine to help with it) and can be distant/quiet sometimes depending on his mood. We've been spending a lot of time together because of the holidays but I've been feeling him distance himself from me slightly. We also have a Disney World trip planned with his family for the first week of January and so I sent him a Snap telling him "I had a stupid question to ask because I was feeling super insecure" 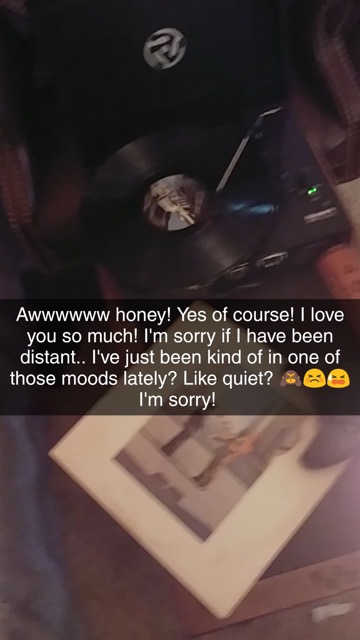 He has had a lot of problems with exes not accepting him and trying to change him as well so I told him I of course understand that he is in a quiet/distant mood and that I was sorry for kind of freaking out but it was just how I was feeling last night. He told me he absolutely hates being like this and that he was really sorry and I told him that I love him so much and that it's perfectly fine and to maybe just let me know if he's in one of these moods so I don't feel insecure like this again.