Ok you guys so I finally have found some time to write my birth story! I gave birth to my son on December 4, 2017! My due date was December 6, 2017! I made the decision to be induced and let me tell you OH MY GOSH I HAVE NEVER BEEN THROUGH SO MUCH PAIN IN MY LIFE! So let's get started! On November 29 at my 39 week appointment I told my midwife I wanted to be induced. She said ok! So she checked my cervix told me I was at a 0 and decided I would be induced on December 3 and that I would be put on cervadil to try to start the dilation process! So I went in on Sunday December 3 at 8pm! It was only me and another lady in labor and delivery so lucky I had the full attention of all the nurses. The nurse started me on Cervadil at around 9pm and let me tell you I thought she was trying to kill me! Inserting the Cervadil felt like the nurse was literally punching me in the vagina it hurt so bad I was screaming!! Ok so the Cervadil is in. And guess what here comes the contractions! I was having contractions with the Cervadil and it hurt bad!!!! I didn't even have an IV in at this point! I felt all the contractions in my back! I had the Cervadil in for 6 hours!!!!!! I couldn't walk at all only to use the bathroom! So after the 6 hours she let me take a break to walk around before they started the pitocin! Now this is when SHIT GOT REAL!! Ok so they put the IV in my wrist and it HURT! Then they started the pitocin! And let me tell you I thought I was dying! I thought the cervadil was bad oh no the pitocin was pain like no other! Oh I forgot to mention when they took the Cervadil out I was dilated to a 3! Ok so they put the pitocin in around 2am! About an hour later I was screaming for help the pain was terrible I told the nurse I need some kind of pain medicine! I couldn't even lay down through the contractions I had to stand up or use the birthing ball or sit in a chair it was terrible! The nurse only allowed me 3 doses of pain medicine because she didn't want to overwhelm the baby. Ok so she gave me the first dose it worked for about an hour. 2 doses later I'm begging for the epidural! The nurse tells me I can't get the epidural until 8am when the anesthesiologist comes in and guess what it's 5am! So I'm literally dying for 3 hours! I cried when the anesthesiologist came in because GIRL I WAS SO HAPPY!!!! The epidural literally felt like a pinch compared to what I had gone through!! Once I got the epidural it was literally a cake walk I got a lot of rest! When I got the epidural I was at a 5. So of course when I got the epidural they cranked up the pitocin . Oh and just my luck my OBGYN wanted to bring in her med students to show them how to check a cervix!! Girl they better be happy I had that epidural and I was exhausted I had 3-4 different hands up my vagina! I guess they decided to use me as a test dummy because I'm young! But anyways! So labor really started kicking in I started throwing up everywhere! Then I told my nurse I feel like I have to shit!!! She checked me and I was at a 9! Everything was happening so fast the pitocin was doing its job! So the nurse got the room ready and all the other nurses came in but guess what! NO OBGYN or MIDWIFE TO BE FOUND!!! so they called my OBGYN and my midwife to see where they were and they were 30 minutes across town at their office! So the nurse had me do practice pushes and guess what she started to see the baby's hair and told me to STOP PUSHING! I told her ok ok! This is my first pregnancy so of course I'm freaking out! So while I'm sitting there trying not to push my baby is literally sitting in the birth canal for 30 minutes while everybody is waiting on the midwife! So she finally shows up and tells me to start pushing and 20 minutes later Pookie Pie was born!!!!! I gave birth to my 7lb 6 oz baby boy at 4:08pm! I can't believe I had him in less than 24 hours! Even though I do wish I would have went into labor naturally let me tell u child birth is no joke!!!! GET THE EPIDURAL!!!!! 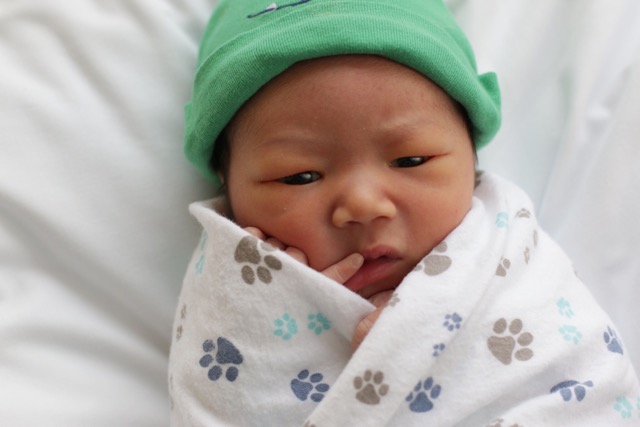