Welp... at about 11:10 I started to have pretty bad upper belly pain, between my ribs and belly button width wise. Well I thought I just had gas so I tried to go to the bathroom and burp. That didn’t work and it just got worse and while I was in the bathroom I got super hot! I literally stripped... in the bathroom at work... lmao. I was in there for about 5 min and I couldn’t take it anymore so I got dressed really quick and went to my desk, clocked out and then went and called my Dr’s office after I told my co worker that I’m going to the Dr since I was hurting so bad and something was wrong.

I called them and spoke to a nurse and told her where I was hurting and that it’s just getting worse. She said that they were about to go lunch and asked if I could come in at 2 and I said I am hurting WAY TOO BAD to wait. I need to be seen NOW. I can’t wait almost 3 hours! So she went and talked to the Dr on call and she said I had to be there by 11:45, at that point it was 11:23, and I said I’ll be there no more than 5 min.

So I got there and checked in and by that point it started hurting in my back as well. I walked up to the front desk and asked if there was anything that I could do to ease the pain. Just anything! Holding my hands above my head, squatting, something! She said just go sit down and they’ll call you back...😑 oh that pissed off. No sympathy, nothing... so of course that made it worse. I haven’t had good luck with the receptionist thus far anyways. Just made me not like her even more. 🤦‍♀️🤷‍♀️

I called my husband and went to the bathroom and tried to throw up, ended up peeing on myself🤗, and he said he was on his way.

They called me back and took my blood pressure 135/88, got my weight and asked for a urine sample but I told them I just peed on myself and I didn’t have anything. 😂😅 I asked for a clipboard or something that I could fan off with bc I was sweating profusely and she went and got me a cold rag and held it on the back of my neck. Omg it felt so good. Sent me to a room and they got the baby’s HR. Sounded good to me but she didn’t tell me exactly what it was. Didn’t seem alarmed by it. Dr finally came in and I think too a vaginal sample and check my cervix. I wasn’t paying attention honestly. I wasn’t dilated.

She said that it sounds like I’m having a gallbladder attack and called me in an US at the hospital of my gallbladder in L&D.; So I called my coworker to take me since she was on lunch too and by that time I sounded like a dying cow. 🐄 From the pain... I wanted to cry so bad but I was hurting so bad I couldn’t 😭 she got me and took me to OutPatient and I went to L&D; after they checked me in and got a room ready. The receptionist asked my name and I told her my maiden name. We’ve been married for 2 months😂

Took me forever to find it... 😑 I hadn’t been to L&D; before. Just the postpartum wing. They got me admitted my husband and SIL got there shortly after I did. Then my MIL. Got my blood drawn, did paperwork, blah blah blah. They couldn’t do the US until after an hour after I ate or drank something. I had breakfast and coffee. Coffee until 11. So I had to wait. 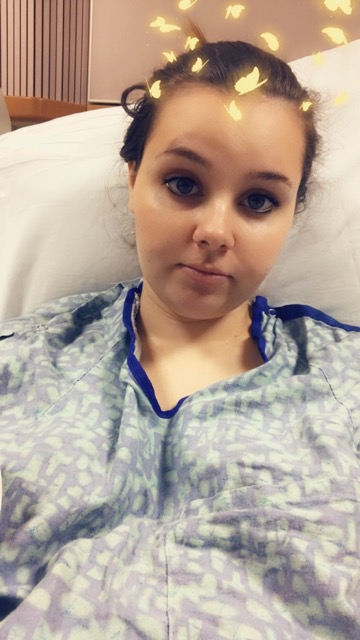 Baby’s HR was 133 the whole time and moving like crazy. The nurse said “Ugh! She’s so pretty!” I laughed and said she look good huh? She said she looks amazing to be 27 weeks + 2days. My mind was really eased.

They got the US and told me I have gallstones and that I had a flare up and it’ll happen again. I asked if I needed to come back in if it happened again and the nurse said that I’m going to want to bc it’ll hurt just as bad and they would like to check me and the baby to make sure everything looks good. So they gave me a diet to go by and told me worse case scenario, I’ll have to deliver early, but if I go by the diet I should be fine. She did say my something showed I was a little dehydrated but everything else was good.

So there goes 3/4 if my diet...🙄 going to have to find different types of food that I can eat now. But everything will be okay if I chose. So diet and we’re good. Ready for these next few weeks to go by! Hopefully I won’t have another flare up as bad as last time if any at all. 🤞

P.S. I had his pain before and went to my regular Dr about it and she said that it was just heartburn and to take 2 Zantac a day... it just wasn’t this bad.