So this is gonna be pretty long but if anyone has any comments that would be amazing. Also plz no comments abt my age I’m almost 15 but like I’m not slutty so plz. Ok so I’ve liked this guy for a SUPER long time like at least five years. Let’s call him bob. He goes to boarding school and sent me a bunch of rlly cute romantic letters that made me think he liked me and last summer at his parents wedding I asked him out. Quick background on me: I’d never had a bf never had a first kiss so I was super nervous

Quick background on him: he has some mental health issues and goes to a special boarding school across the country and comes home like once a month for a week ish but I only see him on the weekends and he doesn’t have a phone bc his parents hate electronics

BACKGROUND ON BOTH: no one knew about us we kept it a secret from our parents and friends.

OK so I talked for a while but not a ton of fully formed sentences came out and finally he’s like if that ur way of asking me to hang out then yes. A month later he asked me if we were still a thing and I was like I hope so and he tried to kiss me but I was scared so I said no. A few months went bye with us technically dating and being flirty but nothing happening. Then in April he kissed me and we wound up getting to 3rd base. It moved pretty fast and was a little weird for me but I was ok with it. This past weekend I realized that every time I hang out with him with our friends he just ignores me. I confronted him abt it and he said it’s so ppl won’t be suspicious but he rlly acts like he hates me. I also told him I didn’t want the relationship to only be abt sex and he said it wouldn’t be. Then on Sunday I was pretty upset about something and wound up telling one of our friends who told me a bunch of stuff that I knew nothing about. I broke up with him the next day but it was awful. We’d been dating for 10 months and I was like I don’t think we should do this anymore and he said that makes sense and we both walked away. I’m gonna attach an email I sent him last night after the break up bc I feel like I need him to just acknowledge that he hurt me bc I still love him. 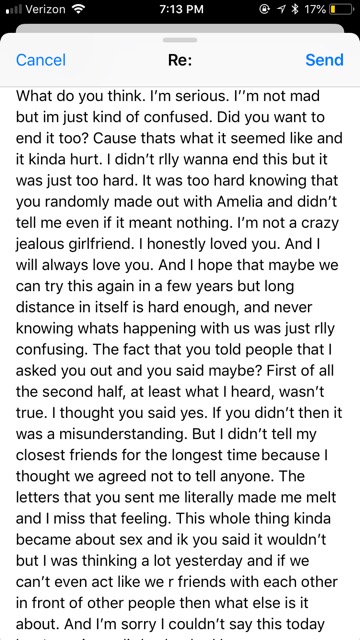 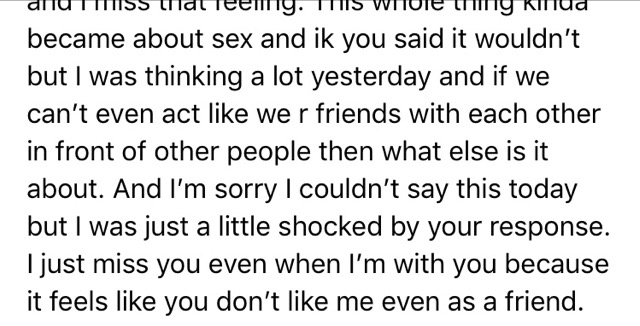