Fiancé mad because I didn’t wear a bra

(Picture of shirt I was wearing when I went out, also I had leggings on 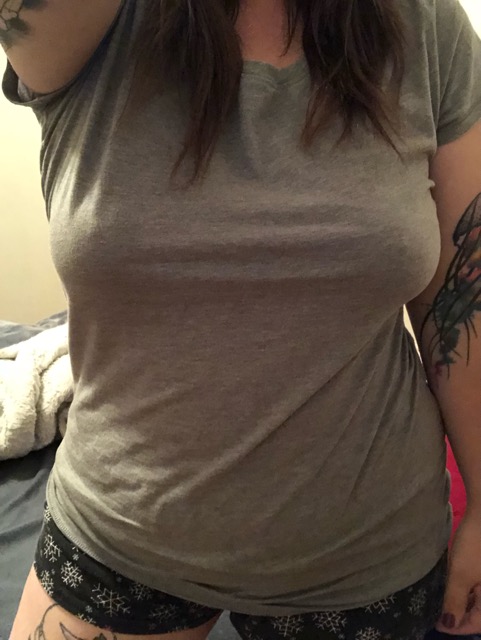 Update: since so many people asked, YES he has been diagnosed bipolar and is on medication!

Also I gotta say thanks to the girls saying that my girls look nice without a bra on. I have a 1 1/2 year old and thought they looked bad lmao

So, my fiancé is really bi polar. He gets extremely mad just about everything randomly if he’s not in the best mood.

Long story short, I went to go pick our food up and didn’t wear a bra. That said, the entire time I was waiting for our food I had my arms crossed so no one could even see me. I get home and he notices and is PISSED. Started a huge fight. I told him I kept my arms crossed because obviously i don’t want people walking by and seeing that I don’t have a bra on and looking at me.

He said I’m not modest and walked out of the house looking like a stripper. Didn’t believe me at all that I kept myself covered up. And now he’s accusing me of cheating.

Now, I see why he would be a little upset. But they’re literally just boobs. But given I told him I covered myself up the entire time I was out and he still threw a fit and didn’t believe me is irritating. I’ve never lied to him, always been honest, I don’t even look at other men and he was acting like I was trying to show myself off. Now he’s laying on the couch crying because he thinks I’ve been cheating on him making me feel like shit. And I SWEAR I have fucking never nor would I ever. If I wanted someone else I’d leave. Plain and simple. This is just ridiculous.

What do you guys think? Are either of us in the wrong, like what is the issue here because this fight went way too far and he won’t even let me talk to him.

Add: I have like 2 sports bras that are very uncomfortable to me and no money to go buy a bra that fits me well. Everything I make goes to bills and my son. So if I’m just running out quick I don’t bother putting one on