I can't stop thinking about it 😭😭😭

I have been with my SO for about 4 years now, last year really wasn't a good one for us. I found out he was emotionally cheating on me with multiple different women through texts and social media. All of them he had met in person in his shop. He had his own business then. I originally found this out from one of the women. She felt so bad that she told her partner and then told me. The stupidest thing is I knew her partner... After this revelation I went through his phone and found several others.

We worked through things and I started to trust him again. A short while after things started to get weird with him. He was acting shifty so of course I assume he's at it again. What I found out was worse. There was talk that one of the women (one i didn't know about) wasn't a woman, only a girl, she was only 15! I knew he had contact with her as he took her on as an intern. I immediately started to feel sick. Did he do this?

I am going out of my mind at this point and I don't know what to do or believe. All the others had been pretty much his age, early 20s. Would he really be this disgusting? It builds up so much inside me that I eventually explode. I lose it with him, screaming that I knew what he had done, I knew he had been sexting with a 15 year old, not only a 15 year old but one he had hired! He looks at me in disbelief, he said he hadn't done anything but he had heard the rumours too and that he didn't want me to get hurt by what people where saying so he tried to sort it out himself without telling me. I didn't understand this, if it wasn't true why didn't he tell me?

He keeps telling me the same thing over and over, his story never changing. Other people who knew him and her were telling me it was lies. They kept telling me that this girl had started the rumour because she had a crush on him and knew she couldn't have him. She was trying to ruin him and us because of it. Again I don't understand, why would a 15 year old girl do this? I've heard of teens having crushes on older people, teachers and things but why would they take it upon themselves to try to ruin a relationship. She could have him sent to prison over this! Would she really be so stupid and manipulative?

The more I hear the more I start to come round. Maybe she is lying, I never in a million years would have thought this of him... He was stupid enough texting other women but a child... I try to let it go and for a while I think I have. Something in me somewhere starts telling me again that I have not let it go. I don't know why I did this, other than the fact if it did happen he would never tell me. I find her on social media and I message her. I am nothing but calm and collected. I did not say anything bad or threaten her. She's a child and if it did happen could I really blame her? I ask her what happened between her and my partner. Hoping she would say nothing at all, she had just worked for him. This is what she sent me... 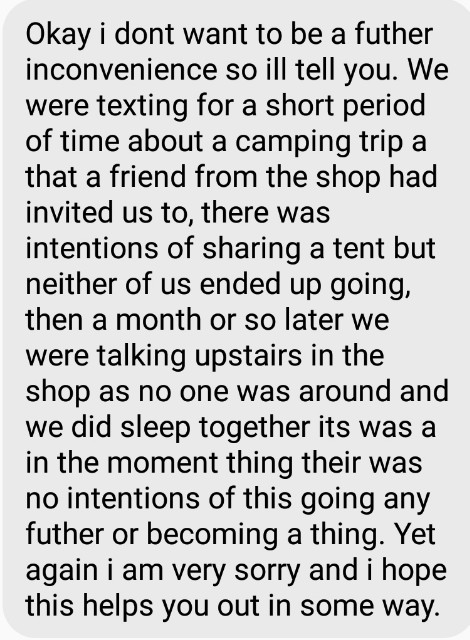 This was crazy, she was talking like she was a fucking adult and it just happened. I really wasn't expecting to have her tell me something physical happened! Part of me died reading this. I didn't say much after that. I just cried for so long! I confronted my partner again about this and he still insisted it was all lies. He said she would have loved me messaging her so she could make things worse. This is what she wants but why would a 15 year old girl do this to me!? He again managed to convince me, I never thought he was a bad guy. We went through some bad times and we both have our issues but he surely can't be capable of this

I'm now a year on from this situation and it's came back into my head again. It's killing me, I want so badly to believe him and let it go. Why can't I? Before this awful rumour I never ever thought he would be capable of such things so why don't I believe him? I'm having such a hard time with this. For a long while I did believe so why has it came back? I don't know what to do anymore. I keep feeling pain and I'm struggling to cope.

I'm so sorry this was so long, I just needed to get this all out. For anyone who reads all of this thank you.