So my boyfriend is 17, his dad was recently out of the hospital for discovering what was wrong he kept getting anxiety attacks he couldn’t sleep really, couldn’t think or focus was always down, he got diagnosed with ptsd and he came home and was trying to find ways to cope he was confused about everything, he was abused as a kid and his mom I think just watched and let it happen, well every time his dad his having a rough time he always yells at my boyfriend, and tries to keep him at home when he wants to leave because he feels threatened, pissed off and it’s not safe for him so he gets away but their always texting him to come home and talk and their worried but when he does it always gets worse and they don’t leave him alone, this has happened when we first were dating in the few months, but lately he feels like his home isn’t home, he’s a senior and just wants to graduate already so he can go to college he got a scholarship, he feels like he’s alone constantly, his mom seems to always be there for his dad and takes most her time to help him but not my boyfriend, his dad always takes it out on him, when his dad asks him to do chores (dust,vacuum) he doesn’t even seem appreciative. He talks to me about everything he comes to me more then his parents because that’s how it is, he just tried to talk to them what’s wrong and he was screaming at him, now my boyfriend has bipolar from his dad but he learns to control it like I told him to , and as you can see, the last argument they were in his dad punched him in the head and he ran to my house and didn’t stop and now as you can see it escalated to this , now seeing a bigger perspective I can see what my boyfriend feels right now and I can’t stop shaking because I’m worried , he gets suicidal thoughts and wanted to cut but he punched the rest of the mirror instead 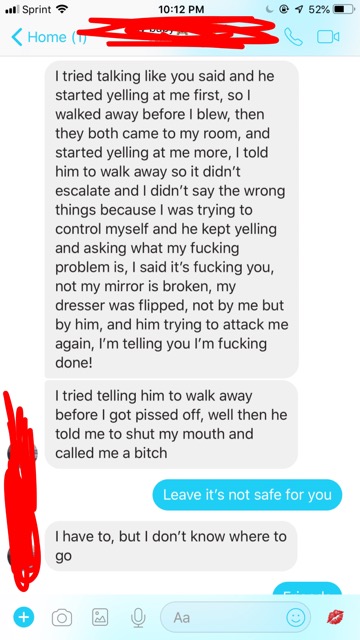