I got the carrot I wanted for Valentine’s Day! 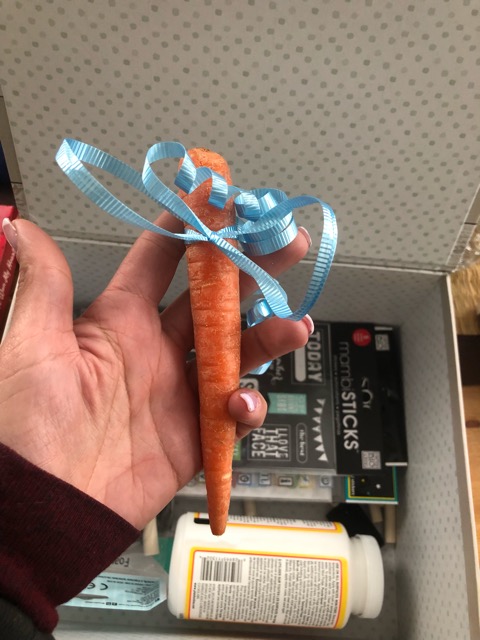 My boyfriend and I were watching a show where a girl was hounding her boyfriend to buy her a ring, and said she wouldn’t settle for anything less than a whole carat. Girl was a total bitch. Then he got her the ring and she hated it. Again, total bitch. We were ripping on her relentlessly, I told him I would be pissed if he ever thought spending that kind of money on an engagement ring was a priority. He knows me, I know him, so it was funny.

We have been together a little over a year, we know we want to get married but also know we won’t be doing it right now, not until we have our living situation and financials settled. So we aren’t even looking to be engaged right now, we are on the same page about it and we both know that we will know when the time is right. So as a joke I looked him dead in the eyes and told him “for Valentine’s Day if I get anything less than a whole carat I’m going to be pissed”.

This MF actually ribbon tied a carrot and it was the cutest thing I’ve ever gotten for Valentine’s Day. He bought a decorative box at a craft store and a whole bunch of supplies so we can decorate the box ourselves with pictures of us on different vacations etc. He said he wanted somewhere special for us to keep all of our mementos (concert tickets stubs, wristbands from places we visited, plane tickets, photos, etc.). He thought it would be a fun craft for us to decorate the box together. And he put my carrot in the box. He knows I don’t like roses any more than I like diamonds, so instead of getting a bouquet of uselessness he got a single rose for me, my mother, and my daughter. Bought us all our favorite chocolate as well.

Goddamnit I love him