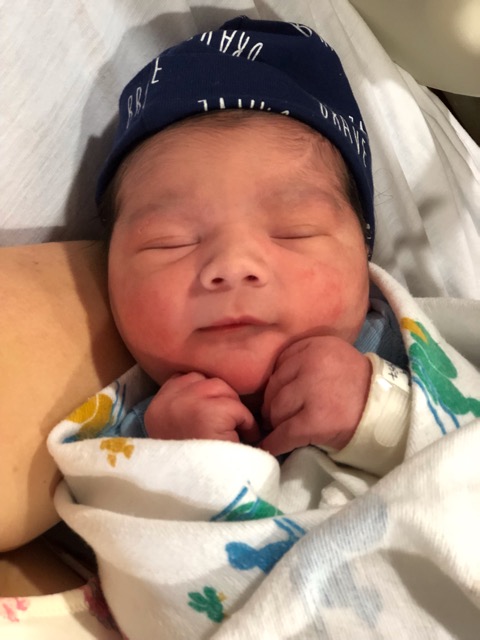 My sweet baby boy is asleep with his daddy, so I have a minute to write out our birth story. What an insane morning! I was due on April 11th and he was born on April 6th at 7:57 am. This was my first baby, so I really didn’t know what to expect or plan for. At 11:30 pm on April 5th my water broke and when I say broke I mean that crap was EVERYWHERE. It felt like a pop inside of me and then fluid was just gushing out. I told my husband and he immediately stripped the bed and started getting our things ready to go while I called my sister-in-law (my doula-like support person) to come over. About an hour later we headed to the hospital. I was having some mild contractions, but my doc wanted us to go in as soon as water broke so we did. We’re admitted by 1 am on the 6th and I’ve reassured my nurse I want to go natural, no epidural. She pushed so hard for me to get one every time she came in the room, and I couldn’t help but giggle every time she said, “I have it all set up, just in case,” and then I’d say, “okay, I’m doing fine for now” and then she’d get so disappointed lol. Anyway, when I got to the hospital I was 3 centimeters, 50% effaced and at -2 station. It was going to be a long night. So, I’m laboring and holding my own pretty well when all of a sudden at 6:54 am my son’s heartbeat dropped into the 60’s and probably 10 nurses ran into the room panicking, throwing an oxygen mask on me, flipping me from side to my knees to my other side, not telling me what’s happening and just expecting me to stay calm. My husband just held my hand while I stared at him in disbelief. They were in the room for maybe a minute when they said, “we’re looking at a different kind of delivery, we need to call the doctor right away.” They told me I needed to have a C Section right away because the baby was in distress and to protect us both, they needed to get him out now. That’s when I broke down crying, scared and fully believing something more serious was wrong and I was going to die. I don’t like the unknown and it was all so fast and I just looked at my family in the room and told myself this was the end and took a deep breath and went with them. Thankfully, mama and babe are both perfectly healthy and it was 100% the right decision because my sweet boy had his first bowel movement in utero out of distress. Turns out after all that time laboring, I was still only between 4/5 dilated! But it happened so fast. Called it at 6:56, pre-op mess at 7:12, 7:20 doc arrived, 7:28 I went back by myself to get a spinal block, 7:48 my husband joined us for the actual delivery, 7:57 baby is here, 8:30 I’m in recovery and holding my baby. Craziest experience of my life and this incision is no joke. The pain isn’t too bad, but walking is difficult. I had a reaction to all of the meds they were pumping and my whole body started shaking after pre-op meds at 7:12, shook all through the surgery and didn’t stop until maybe 6pm! I also threw up on the table, a lot, from the spinal block. They said it was normal to feel nausea, but boy was that bad! Ultimately, it was a crazy day and it’s going to take me a while to forget this trauma to be able to have another child, but I’m so thankful for doctors and nurses who think and act quickly (even though it would be nice to explain something every once in a whole). Everyone is healthy and that’s the most important thing. Also, he’s the most precious thing I e ever seen, and I’m totally not biased at all 😉😭🥰 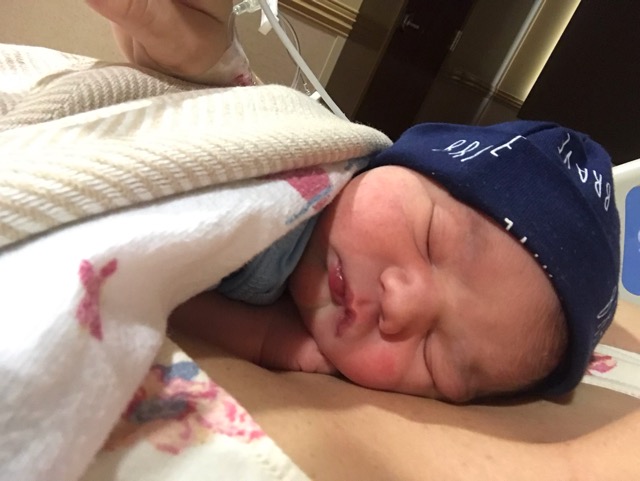