What were some of your earliest signs?

So, I want to preface saying that we aren’t trying for a baby, but it wouldn’t necessarily be a bad thing if it happened. We’ve been together 6 years. We know what we need to do to prevent pregnancy, although accidents do happen.

I think I ovulated a day or two before Glow anticipated. If that was the case, I had sex the day before “ovulation” and the day after. I know I’m only approximately 5dpo or so, but I swear I can tell something is different. I will add a picture of what glow shows below:

I think I may have had implantation bleeding yesterday. I am 9 days away from a period and rarely ever bleed. This wasn’t blood though, it was, but wasn’t... I’ll attach a picture to show. There was a tiny bit more before I took the picture, but I flushed it, and then thought this could be implantation, so decided to take a picture. In this picture, it is hard to tell, but there was pink around the one line of blood you see on the toilet paper. When I wiped previously, there was more red tint. Picture below. 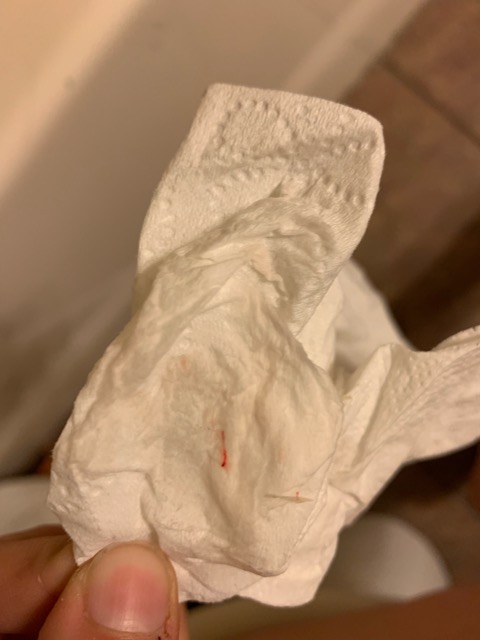 My other weird thing that just happened that made me post this; I just had the strangest, random taste of metallic in my mouth. It only lasted a couple minutes, but it was strong. Almost as if my mouth had blood in it.

My nipples or boobs for that matter feel tingly. And my boobs are extremely swollen.

I know it would be way too early to have this now, but I am nauseous. Could be because I haven’t eaten, but still. Thought I’d throw that out there.

I am 9 days away from my period, so I’ll update if I am indeed pregnant.

What were some of your earliest, earliest signs that made you think you were in fact pregnant? Am I just being paranoid? Or did you ladies ever have something similar happen to you?

I appreciate all the feedback! Thank you!