I feel like I’ve waited forever for it to be my turn to post my daughter’s birth story, so I apologize in advance for the length; I never was good at summarizing. To preface, I had a relatively easy pregnancy. The only things that sucked was the constant back and sciatica pain (it got so bad) and I had some extra amniotic fluid that my doctor wanted monitored on an ultrasound once a week starting at the beginning of February. I wasn’t due until March 21st so oof those ultrasounds at the beginning of the year definitely weren’t fun on my bank account (they did, however, help us nearly reach our deductible by the time baby girl arrived; plus I got to see her every week, so that was cool). With the way she was progressing (at one ultrasound they estimated her at 9 lbs...then a week later 7 so I was a little nervous, to say the least). By week 38 I was 2cm dilated and 70% effaced. I thought for sure I was going to have her early. This theory was only encouraged when Braxton Hicks contractions turned into real contractions by week 38. I just had a feeling she’d be early, you know? It didn’t help I was getting her nursery all done and my house DEEP cleaned every weekend before her due date. I thought for sure that would’ve put me into labor.

But by week 40, I hadn’t dilated any more. I was checked on a Monday and she was due that Thursday. My doctor very kindly didn’t push me to be induced so soon after her due date and we scheduled for me to be induced the following Monday. I was pretty positive baby girl would work with me. I mean I was giving her a whole week to get out! And lemme tell ya, I was trying almost all the old wives tales I was willing to try to trigger labor. None of it worked.

Thursday came and went and we were really disappointed. Good pregnancy or not, I was sick of it and wanted to meet my daughter already. So even though my contractions were all over the place, sometimes more intense than others, the weekend passed and it was time to face the music Monday morning. I was happy I was going to see my daughter (hopefully that same day—girl could dream, right?) but very disappointed I wouldn’t labor on my own or experience my water breaking on my own. My husband and I got to L&D at 5am but I wasn’t put on pitocin until almost 10 (some technical issues with my doctor’s orders not getting to the hospital...a little annoying, but it was ok). I was really scared pitocin was going to kill me but it actually wasn’t that bad until about one (they asked me at 11 if I wanted my epidural but I declined since I wanted to able to walk around still). But by one I was almost passing out it was getting so intense. My doctor had already broken my water (ladies who are worried about that being painful, it was totally fine. I was almost 4cm by then and my doctor did it while she was already doing the cervical sweep—it was super quick and no more painful/uncomfortable than the sweep) so I wasn’t wanting to be walking around so much anyway (ew). But they only had one anesthesiologist and he was pulled away for a scheduled c-section. So even though I asked for the epidural at 1:30, I wasn’t able to get it until a little after three. Let me tell y’all. The instant relief was amazing. I was in tears and, again, almost passing out because some of my contractions got so strong (I labored in my back horribly and my husband, God bless him, was shoving his fist in my lower back to help ease the pain) and didn’t care how bad the epidural was going to hurt. Again, ladies who are nervous about the epidural, it was not painful. Of course they numb you beforehand and that’s all you feel other than pressure; and sitting still isn’t so bad either because they have you sit and slouch forward and honestly that was a comfortable position for me. After that, I got a nap and my husband went to go eat (I really hated not being able to eat, y’all that sucked so bad).

Everything was pretty smooth after that. I didn’t feel anything past my waist except a little pressure and I could still wiggle my toes on my right foot so I didn’t feel overwhelmed not being able to move (and anyway it was completely worth it to not be in pain anymore). I was stuck at 8cm for a few hours and getting my cervix to completely soften took a lot of position switching (truly, that part sucked because my back pain was still uncomfortable and every time they moved me around, it just sucked—at one point I was propped on my belly on all fours, and that felt amazing while being moderately humiliating if I cared at that point). So basically I was just swapped positions, cervix checked, and slept until midnight.

I started pushing at 12:20 (y’all omg that suuuuuucked). Again, I can’t feel anything but pressure and this time that was frustrating because I couldn’t tell if I was actually pushing. Another thing is they had me hold my breath for ten seconds and push at least three times per contraction. Except I would hold my breath for a few seconds before they started counting, so I never made it to their count of ten. That third push was always the hardest. And my contractions were hitting high so when I was in pushing position, I literally couldn’t breathe. Baby girl’s feet were so high up and she was being sooooo stubborn. But me being me, I really thought I’d be one of those lucky women who had the baby out in less than an hour.

Boy was I wrong.

The longer I was pushing for, the more exhausted I got. Even when she moved lower, I was so tired. I had AMAZING nurses who were so sweet and encouraging. One even had me playing tug of war with her with a knotted sheet (it hurt, but shit it was effective as hell). By two o’clock I was convinced this child was never going to come out of me. I was tired of hearing how close she was and that they could see her head. We could see her head for what felt like forever! My sweet husband watched the whole thing while still being so encouraging. I’ll be honest, there’s a lot I don’t remember from 12-2 because I was so focused on getting her out, which she was clearly pissed about.

But at 2:11, my sweet daughter finally appeared. She literally was swinging and kicking at my doctor! And even though I only felt the ring of fire pain and everything else pressure, I could feel when she finally was out.

It felt like a fish falling out of a waterfall (or at least what I imagine that would feel like lol). Her umbilical cord was too short for them to pull her up to me, which I was grateful for because for nine months I was so worried with the umbilical cord being wrapped around her neck. In the time it took for my husband to cut the cord to get her to my chest, I was in between sobbing and laughing. I was so relieved it was finally over and then there she was—there was the sweet angel I had been trying to picture for nine months. I could finally see what she looked like (JUST like my husband, btw). I loved her immediately. I had loved her for 40 weeks and five days. But there she was, screaming at the top of her little lungs, and I was finally holding her. She was already trying to pick up her head and sucking her thumb (which she was doing in some ultrasounds!)

I had only a little tearing and had spiked a 101 fever an hour before I started pushing, so little girl had a small fever too. But that was the only complications. I was really lucky and blessed with a great labor and birth. I had anxiety for months over the slightest thing going wrong and everything was pretty fucking awesome. Not to get preachy, but I completely feel like God answered all my prayers with her delivery.

Through all of this, my husband has been my rock. We made the decision not to tell anyone I was being induced (I’d warned everyone since the beginning they wouldn’t know when I went into labor and I’d call them when she was born—and I did, even though it was almost 4am by the time I was able to) and it was honestly the best decision. We got to spend the day just us going through this and not have to worry about our phones blowing up and updating anyone (of course if anything had gone wrong, our families would’ve been informed). We didn’t go home until Thursday and since we’ve been home, nearly two weeks later, my husband has just waited and doted on us. He’s absolutely amazing. I couldn’t do this without him. And she’s SUCH a good baby. Aside from some gasy tummy issues last week, she’s so chill. Our nurse said we won the prize for best team in breastfeeding (she eats sooooo much y’all). We are just so blessed and having the best time getting to know her. Our phones are running out of storage space because we can’t stop taking pictures! 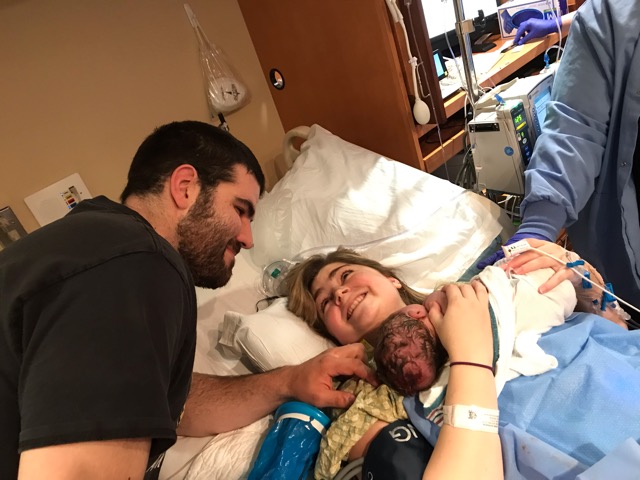 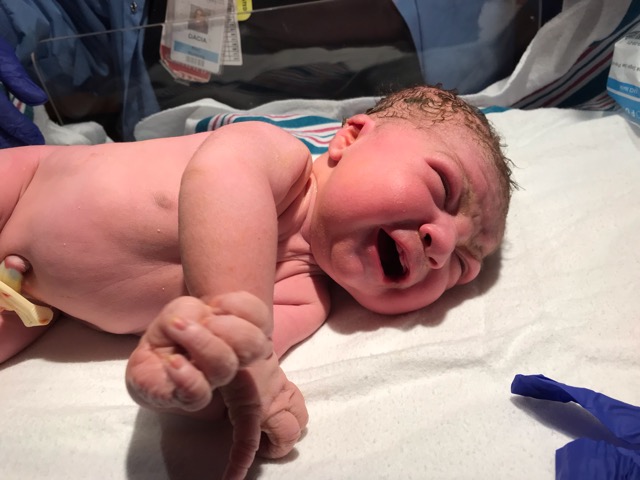 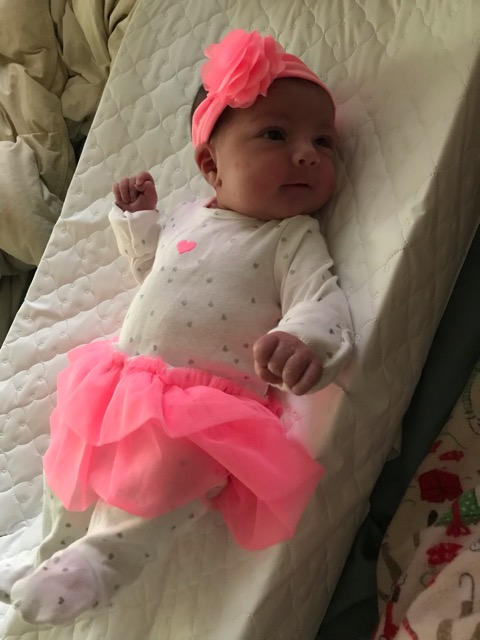 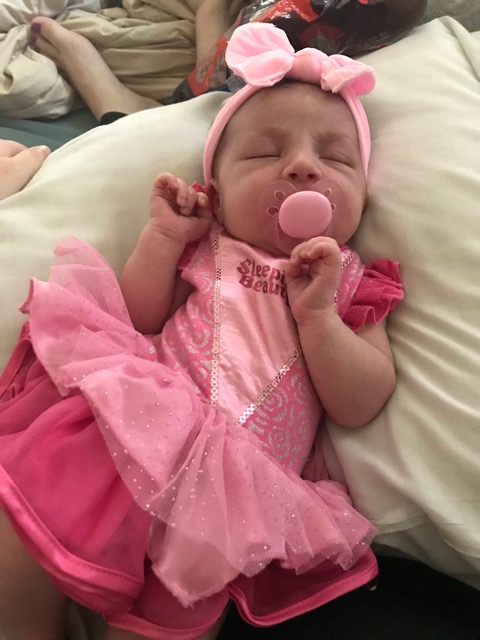 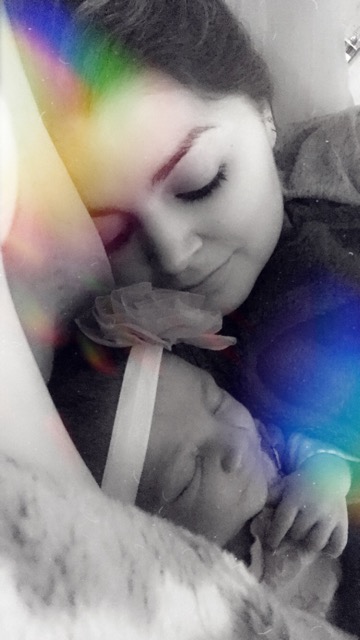