So I’m here thinking, what do I do???? Do I message the account straight away? Do I try and follow them and see what happens?

My brother was awake at this point so I message him asking to try and follow the account and see what happens. (The account never accepts him and blocks him)

Next day I’m thinking about it heavily, I’m just creeped out and feeling gross! Who could do this?

You’ll notice in the screenshots to come of my conversion with whoever tf is pretending to be me, that I ask if they are Danny. I thought it could be this man as he is extremely creepy and stalkerish. He was a backpacker from the UK I knew from the age of 16-18 through my mum as they met at work and became good friends, his gf became very close to our family too. One day (I was 18 so a few years ago) he asked to use my phone to take pictures of the sunset! Sure! After about ten minutes he gave me my phone back, I unlocked it and my camera album app was open on a nude PRIVATE photo of myself. And when I double tapped to see what other apps were open, my messenger app was open.

I was so angry, he had obviously been keeping an eye on when I was putting my pass key in to unlock my phone, because I never told him the code and when I gave him my phone I only swiped up on camera (you can view the photos you’ve taken since opening camera, but need the code to open the camera roll to see anything more)

I never confronted him, I was embarrassed and nervous and felt gross. I DID tell my mum, she brushed it off as I shouldn’t have that stuff on my phone anyway, I disagreed as it was my private content that I never gave him permission to look at. I also never thought he’d watch me put my passcode in to the extent that he would remember it and use it. ANYWAY a year later I’m living in another state, I get a random message from him one day SENDING ME MY OWN NUDE PHOTOS AND SAYING “Kay you should never have tried to send these to me I have a gf and if she finds out she won’t be happy” I LOST IT AND CALLED MY MUM STRAIGHT AWAY. SHE MESSAGED HIM IMMEDIATELY AND I CANT SAY WHAT SHE WROTE BUT BASICALLY TELLING HIM TO LEAVE AUSTRALIA.

He kept messaging me trying to convince me I must have accidentally sent them to him recently and maybe deleted the chat in my sleep or something ... LOL

I just replied with remember that time with the phone and sunset Danny?? Those photos you sent me where the ones on my phone at the time, those are almost a year old and I have a new phone with none of those photos on my account. After some more colourful words I blocked him. So my point is (when you read the conversation I had with this person) my first thought was and kinda am still suspicious that it was Danny.

So I’m thinking... how am I gonna find out who this is? Yes I want the account to be removed but I wanna know what kinda sicko this is and if they are someone I’m close to or friends with if not Danny. 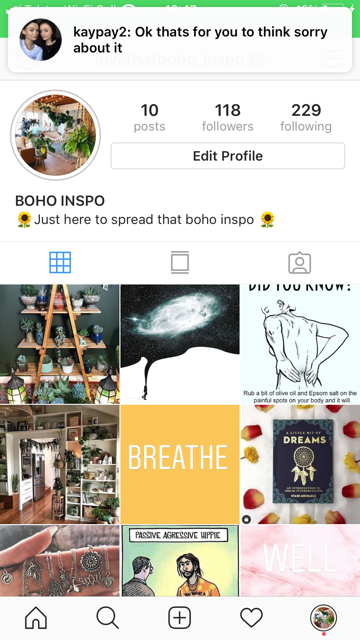 I DIDNT STEAL ANYONES IDENTITY THO, just made a pretty boho reposting account to follow them on. (I think they were on to me but at the same time I don’t and you’ll see why when you look at the gross messages they sent this account)

I requested to follow them and sent them a message also just saying how we’d love to follow you and see your boho inspo blah blah blah signed L.

At this point it’s now Monday. They haven’t accepted my fake account follow request and I’m getting annoyed and super grossed out about the thought of who could be behind this account.

I message them.... let the screenshots of our conversation tell the story.

There is some very vulgar language on my part to this person, and yes afterwards I realised I don’t know this person or what they are capable of and I should have refrained from making them angry in anyway. I was and still am very creeped out.

(I screenshotted these after the account was taken down by Instagram, hence why it says instagrammer now) 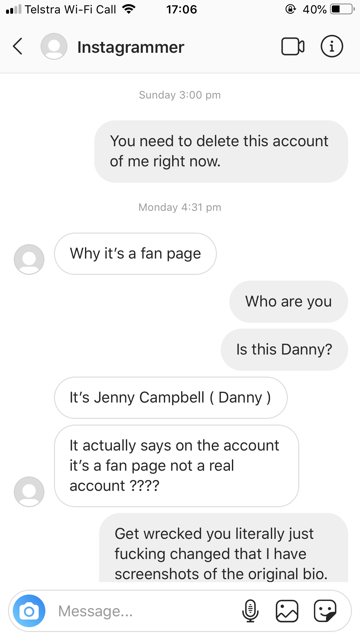 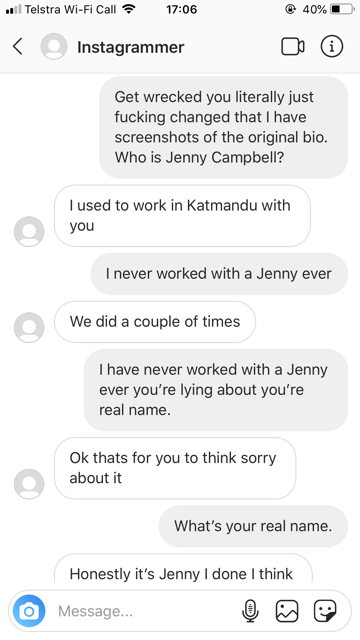 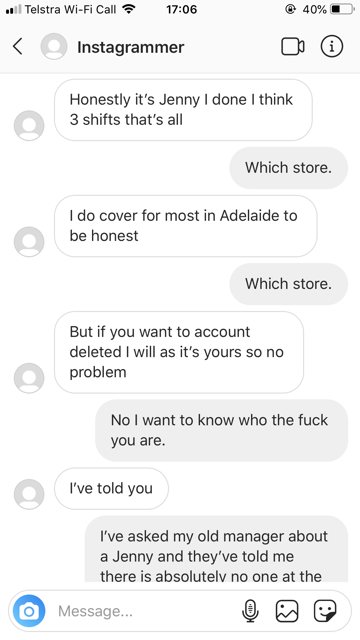 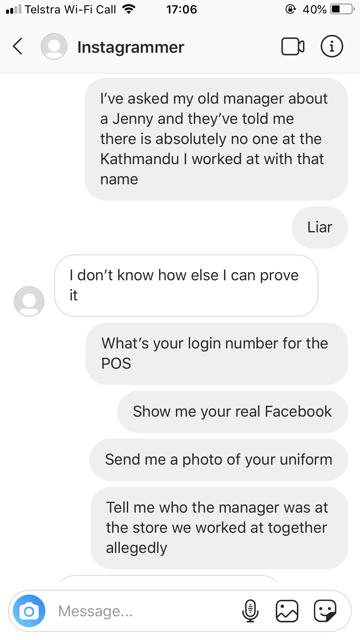 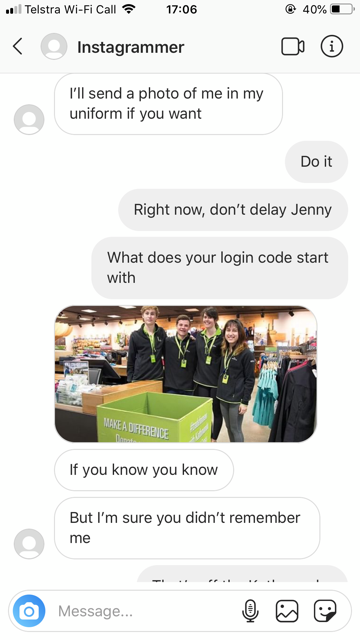 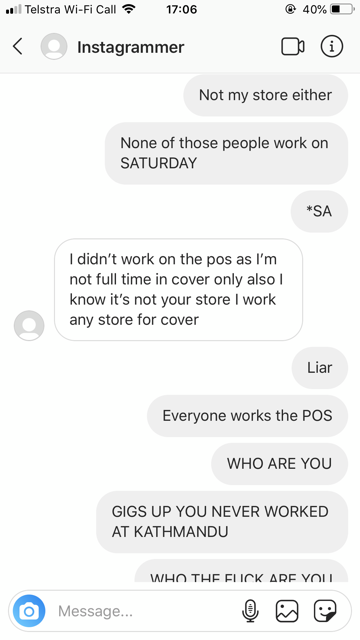 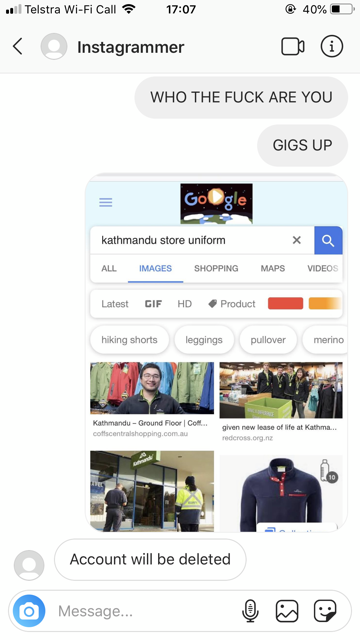 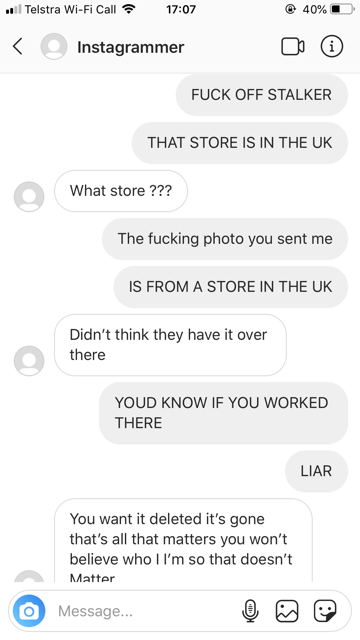 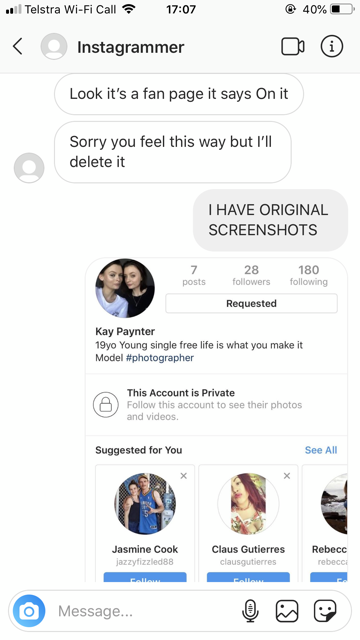 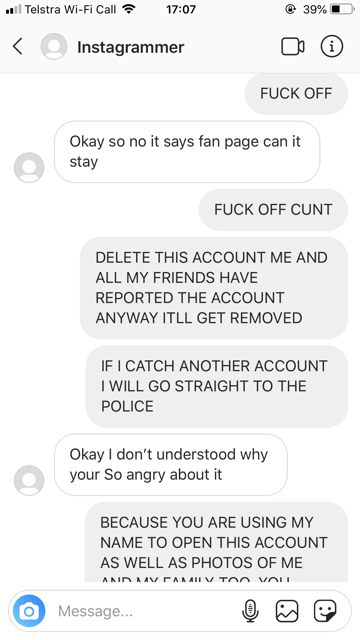 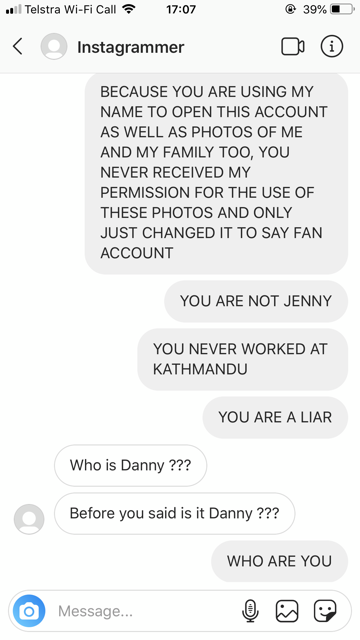 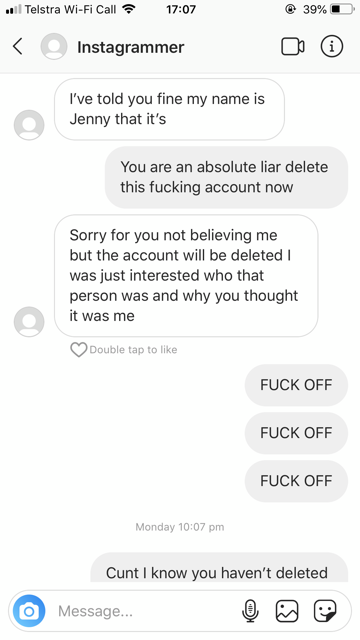 *** what they changed it too during our conversation ****

FYI THEY NEVER DELETED THE ACCOUNT THEY JUST BLOCKED ME.

SO THEN THEY MESSAGE MY BOHO FAKE ACCOUNT ABOUT A NECKLACE I REPOSTED THIS IS WHERE I GET VERY DISTRAUGHT AND CREEPED OUT. 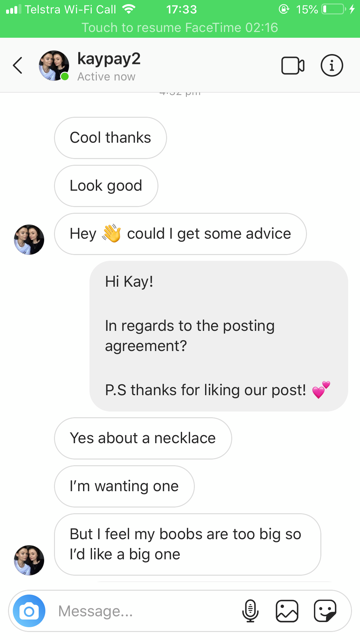 AFTER THIS I LITERALLY CRIED. 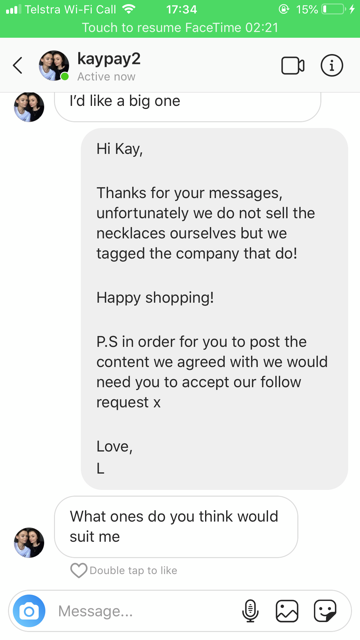 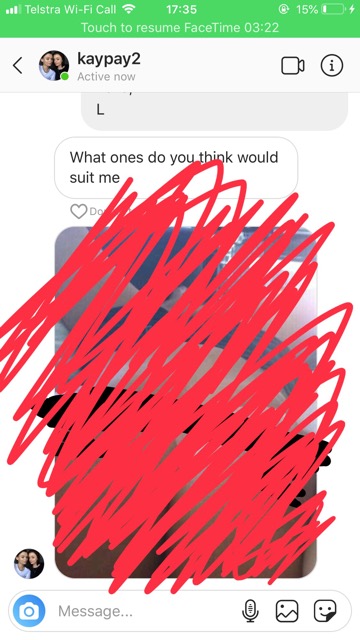 ***** I SCRIBBLED OVER THE NIPPLES ECT BUT THIS WAS A PROPER NUDE SENT TO THIS BOHO ACCOUNT (really me) BY SOMEONE PRETENDING TO BE ME WITH MY NAME SENDING THIS STUFF. THIS PHOTO COULD JUST BE ANOTHER INNOCENTS PHOTOS TAKEN SO I SCRIBBLED OVER IT TO PROTECT THE PERSON******

THAT IS NOT ME, AND I DONT KNOW IF THAT IS THE PERSON THAT HAD MADE THE ACCOUNT OR JUST AN INNOCENT PERSON.

After this, I politely messaged them that we will have to block them as this is inappropriate content, they never replied.

One new account with my name has sprung up since then, however nothing has been posted.

HERES WHAT I STILL WANT TO KNOW

- how did they know I used to work at Kathmandu? I never had this info on ANY of my social medias

-who is the girl tanning on the beach that is allegedly me? Is it the one who made the account or just another innocent?

-just a general statement, I am severely grossed out that they uploaded photos of my sisters and mum.

-my main worry was what where they messaging other accounts? Gross, vulgar things under my name that could get me in a lot of trouble if sent to the wrong person?

- how much more do they know about me? What other accounts on other social media’s are out there of me? Why are they doing this to me?

So yeah that’s my story! Keep an eye out for fake accounts of yourself ladies. I have never had enemies ect so I have no idea why this happened. I’m watching the new account that’s been made with my name very closely, yes I have reported it but I also want to know who it is.