He most likely saved my life tonight.

Y’all. So to sum it up, my husband got off today at 5:55pm from work. I asked him if he can bring Panda Express because I was starving and my head was already starting to hurt.

So he comes, brings me panda and we’re chilling in the dining room/kitchen eating and talking about his day. I have the cordless phone with me and a notepad to take notes when people call.

Anyways, I get a call and on the other line sounded like an elderly woman who was in fear for her life. She was stuttering, sounded terrified, crying. I was barely able to understand her. All I was understanding was “I’m hiding in my room, I think someone’s in my room” when I kept asking what room, all I was able to understand was “5” I already knew that there were no rooms rented upstairs with “5” in it because they are rented out to workers working on a warehouse nearby, with double beds which are even number room numbers.

So I asked “105?” And she said please hurry I think someone’s in my room (in a very scared toned) at that point she’s on speaker for my husband to hear. He asked where 105 and I ran to the front desk to get a key made, and we bolted to the room, knocked on it and no one was answering, so we opened the room and suitcases were everywhere, checked in the bathroom, no one was in there.

So I’m starting to freak out.

I think to myself, “there’s another (our hotel name) down the freeway that we always get mistaken for, what if they are staying at that hotel and they called us by accident? (Happens allllll the time with reservations)” so we call them and ask if they have any elderly women in any rooms, told them what happened and the front desk said she’s going to go check right now to be safe.

She ended up calling back about 20 minutes later, and said that there were no rooms rented with “5” in it. And that she had called her manager and they told her that there’s been a lot of instances lately where someone is watching the front desk (me) from outside and they’ll call to lure us to another section of the hotel to rob us.

Y’all THAT HAD ME SHAKING. I was so freakeddddd the fuck out.

Like what if this happened and my husband wasn’t here? I would have ran to that room to check on our guest, come back to someone robbing us, they see me, and BAM 💥 I’m shot.

So. He’s staying here with me until my shift is over.

In his cute little work boots and all.

We also called the sheriffs, but they weren’t much help.

Because even though this was most likely a prank call or a fake call to lure me somewhere, it sounded so real and I want to cry just thinking about “what if it was a real situation.” Hats off to y’all, because I’m too emotional and sensitive to hear someone in pain shouting for help on the other line. I would cry after every shift. 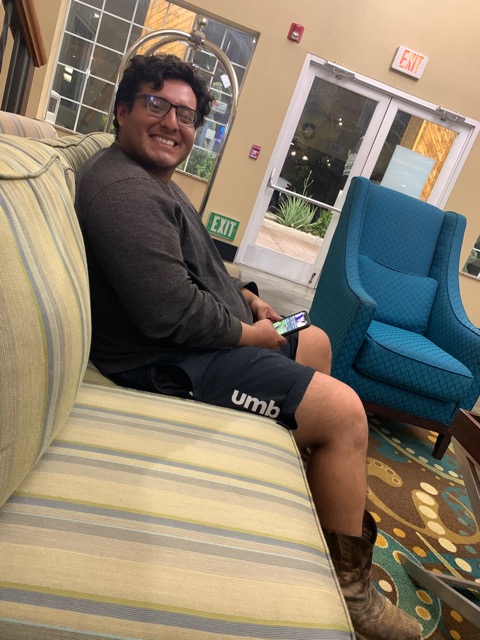