I like this guy I have something casual with I haven’t told him yet because I want to suss out if he does. Because a few things have happened where I got that impression but I fear rejection and looking stupid that’s why I’m hesitant to tell and ask him. A couple of nights ago he asked why I like him and I said because he’s intelligent, mature and honest. He said he expected a more emotional response??🤷‍♀️ I didn’t get a chance to ask so I asked last night. *screenshots below*

I feel like he’s wasn’t meaningful like he was just saying stuff to say it. I get the vibe he likes me but not in that way. The “like-like way”. My background is Italian so that’s why he asked for a word but I feel like it’s weird to ask someone to give you a word you can use to describe them. Like if I were him, and a guy asked I would google translate one and put it in there not ask someone to give it to me. I’m a real over thinker. But I kind of feel a bit :/ after that. 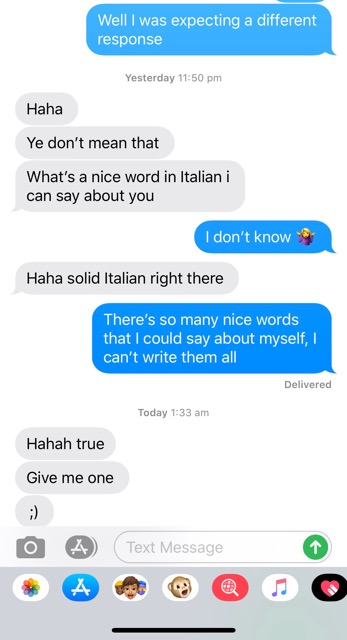