Ok, I just read a post about a woman appreciating her husband so much cuz he works so hard and now I feel like an asshole. My husband works Mon-Fri 9-5 and then comes home and gets on his game. I’m a SAHM. We have a baby under 1 and a 6 year old. My mom lives with us so she helps me with A LOT. Last night my husband bought a lego set for our 6 year old and she we was so excited to build it with him. He maybe spends an hour with her for the week, if that. Last night, they were building the LEGO set and he had to run out for a little while for something relating to work. Not urgent but I get it. Ended up staying 2 hours and comes back and gets on his game as she’s sitting there with it all set up and waiting for him. While he was gone she kept saying he forgot about daddy/daughter time 💔 so he and I had an arrangement that I would purchase some items for him as a gift. And when I was trying to explain to him that she was really looking forward to a little time with him, he was being an ass putting his gaming headset on and being rude to her like just doing it himself and ignoring her. I was disappointed and pissed seeing her disappointed and hurt and dismissed. I went into our joint account and took out the money I had put there for his gift because I was upset he just didn’t care about both of our feelings. He called me this morning and I ended up putting it back (which I was gonna do anyways I was just pissed) but now I feel like a complete b*tch. Was I wrong for doing that? I just wanted him to feel the disappointment she felt and he wasn’t even listening. I told him while I was doing it since you’re being an asshole I’m going to be an asshole. But I feel like the biggest jerk guys. I tried doing the LEGO set with her but LO was super fussy. He’s the bread winner so I guess I should just be grateful for that. He doesn’t help with any of the housekeeping which is fine with me because he does work but I feel like my little daughter deserved better last night. I handled it complete wrong, right?

Btw during the phone call he was being very rude (probably justified cuz I shouldn’t have touched it after putting it there) but hung up on me when I tried to explain. I then sent him this text 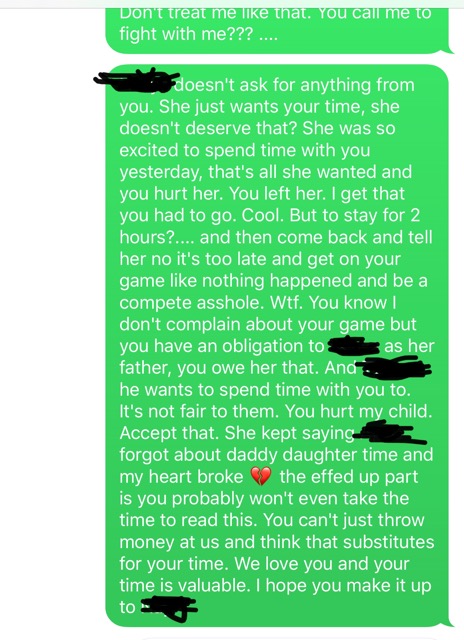