Do you think this is wrong and should she be prosecuted? ***Content Warning regarding child pornography

A YouTuber named Gabi DeMartino (25 years old) is receiving backlash for something she posted on OnlyFans. As you may know, OnlyFans is a website where people can sell subscriptions, photos, videos, and content to their fans/followers. Most content featured on the site is of a sexual nature. Many sex workers utilize this platform.

Gabi created an OF account and posted a video for her OF followers to purchase for $3. Video thumbnails are blurred out on OF so you have to buy it to find out what the video is. But you can see the caption and Gabi captioned the video “won’t put my panties on ☺️.” People purchased the video and the video apparently was a home video of Gabi as a three year old child laughing and expressing she doesn’t have underwear on or something to that extent. Some have reported she pulls her dress up. I don’t believe it shows her nude or anything, though. A photo of her response and explanation is at the end. From the one article I read, OnlyFans did delete her account.

That is the most disturbing part, but another point to consider is the fact that her fanbase is mostly young, minor girls. Many of which which are defending her actions.

Gabi did respond and removed the video. She said it was not well thought out, but some (including people who work in sex work) people thought her response downplayed the seriousness of the issue. 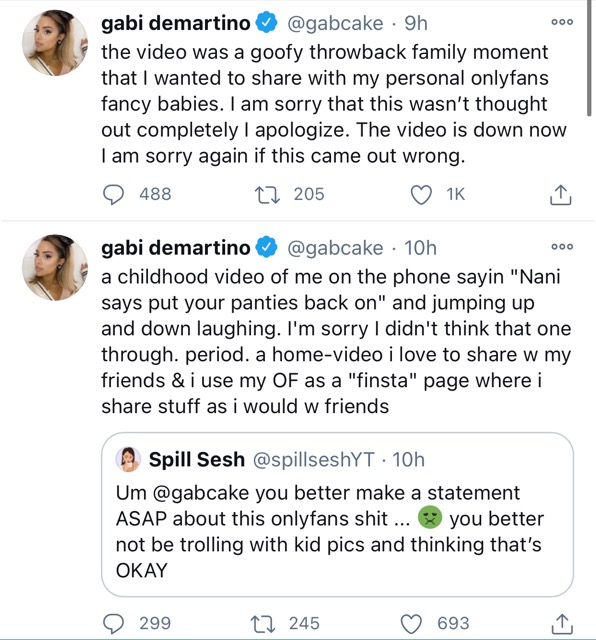