He stalked me… for years.

I’m posting anonymously because I need opinions and advice but I don’t want anyone to make the connection of who I am…because I am feeling mixed up and confused because I post gushing over my fiancé a lot.

So let me take you back a bit - i dated a man years and years ago. I ended up meeting someone else and so I left him and got together with the new guy. We ended up married and with two kids and a horrible relationship. We broke up and there I was - 2 months pregnant with our second child, getting 0 support from my ex, going through a lot as a single parent. Life was hard.

Then my ex reached out - the one I dated before my husband…he had done this throughout the years and it was nothing malicious. But this time I found myself single and he took that opportunity to make it known he still wanted to be with me, that he had not dated since me (7 years!!), and that he was determined for us to be together. We chatted - a lot, but I wasn’t really interested in dating at that time. We chatted daily from when I was two months pregnant until my daughter was 3 months old…then I finally agreed to a date.

It went well - all of it. He’s perfect. We went on one date and suddenly three months later he was moving in, 6 months in my kids asked to call him dad, and just over a year in he proposed to me. There is 0 red flags. He’s an amazing partner, father and overall person. My kids adore him, my parents love him, my friends think he’s great - I hit the jackpot.

Now you need to understand this - he is wonderful. He is extremely attractive to women, he takes care of himself, very calm and stoic, very romantic and loving, super hard worker, so giving - almost excessively. Plus he loves taking care of me - he does most of all the household chores, watches the kids so I can relax even after he’s worked 12 hour shifts, and is always making sure I am happy. I’ve never been in a relationship like this!!! I am not this prize of a human, I have a ton of mental health issues, I am obese, extremely moody and overall just alright….so for someone like him to even be into me is kind of shocking.

Which makes this next part confusing….the other night while chatting, he said he needed to tell me something….he said he stalked me. For the entire time we were apart. He would follow me from places, keep tabs of me online on social media, he even befriended someone I knew so he could get info on me….plus he used his time to become a man “worthy of me” so that I would want him….

It’s nothing malicious, or with intention to harm me…but what the fuck?

I asked him why and he said he was just very obsessed with me…he wasn’t sure why his love was so intense for me, but from the moment we met he’s only ever wanted me. He was sure we were meant to be and was just waiting for that time to happen.

I told him I needed time to process that. It gives me really confusing feelings…I love him, he loves me…but that’s scary. The extent he went to, to be involved in my life is really creepy…. He is not a violent person, I don’t fear for my safety - it’s just very unsettling.

We have a wonderful life together…I am just so confused. I need some thoughts from people not in my life, because I don’t want their opinions to change of him. What would you do?

(Please no “run” comments….my kids have been calling him dad for two years now, we live together, our families and lives are very intertwined now….)

I seriously appreciate reading everyone’s comments on this. Having the perspective of others has been very helpful. So thank you. I did want to address some things for clarity.

1. I would have never known if he did not tell me. I had no idea this was happening in my life. He told me because we’re currently going through the steps to be married and one is couples counselling…we were sharing things and that came out. He said it started at first because he missed me, but then he realized I was in an abusive relationship and wanted to make sure I was safe - and was waiting for me to leave him. This doesn’t justify what he did AT ALL - but explains a bit. It wasn’t something that consumed all his free time, but he knew the basics of my life at any given time. He said if I never left my ex, he would just accept my choice and continue to watch over me. He never had any intention of anything else.

2. When I broke up with him it was because I was young and stupid. He is very mature, and I was looking for a more turbulent relationship…which I often regretted but stayed because my children. He did not date after me - but he did have a few sexual relationships…but mostly he worked on himself by climbing the career ladder, becoming very physically fit, paying off any debts, ect. He states he wanted there to be no more obstacles when I was single again.

3. I appreciate the concerns of him being fake, but he’s the same person as he was 9 years ago when I first dated him…I never get the vibe that he’s not being authentic and he’s always been like this. My son is 7 and has autism - he can be very difficult - and this man is so loving, understanding and helpful. My son adores him, and is so happy to finally have a dad…if he was faking it, then he deserves an acting award for the shit he has had to “pretend” through. This is the healthiest and happiest relationship I’ve ever had.

4. Up until this point, I had zero intention of ever leaving him. He is the kindest, most loving, most doting partner ever. I have mental and physical issues, and he is so helpful and wonderful with them. He never gets mad, makes me feel poorly, or anything…but I do also now have that fear. If I ever did leave, would he snap? I have no idea. I don’t think he would, but you can never say never. My ex and I had a awful relationship, and he was extremely manipulative, narcissistic, controlling and selfish - it was really horrible, and I knew it, but I stayed because I was worried no one else would ever accept my autistic child. This man is so opposite in every way…I’d like to believe that won’t change.

5. This one is probably not necessary but whatever. I do not have low confidence - I love my body; but I am also realistic about beauty standards. When I first met my fiancé I was 100 pounds lighter…I understand not everyone likes a big girl - that’s ok! But I am realistic about the “league” of men I can typically get. This is just the truth, even if people like to deny it or pretend it’s not happening. I know I am a lovely big gal - but it’s very rare that a 6’1, muscular, handsome, successful man is into women who look like me. Often times he gets hit on when we go out - and women are confused when he’s with me. I ain’t upset about that, I love me…but I’m not stupid as to why people don’t get it either.

I have decided he will go to therapy about this, and we will continue the couples counselling even after we’re done the current sessions. What he did was creepy, and there is no excuse for it - but also he loves me, he loves my kids, he loves the life we have and so do I. I feel like if I left him without trying to move past this would be something I regretted…sorry if that disappoints anyone. 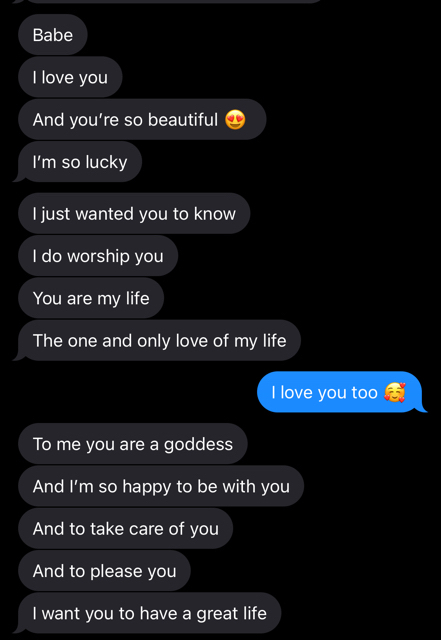