Why I Won't Apologize For Taking Zofran

I am 11 weeks and 5 days pregnant. I just began taking Zofran yesterday. And the amount of hate I've gotten from other women is ridiculous. So let me explain why I'll never apologize for taking what some rude "friend" called "That Cleft Lip Medicine".

Prior to becoming pregnant, I weighed 142 lbs. I'm 5'9" so I was pretty thin from the beginning. Truthfully, from a few days following my child's conception, the nausea set in. Before I could even test positive on an HPT, I was spending my days burping up stomach acid and feeling nauseous. Lovely, isn't it? Not long after my first BFP, I my taste buds began to change and my nausea got kicked into another gear. Water, no lie, tasted like blood. My diet changed drastically, and I was on a nice regiment of Gatorade and chips and salsa. Eventually, my small meals and Gatorade weren't enough. I called my OB who gave me some OTC options along with some herbal remedies. I tried dramamine and ginger pills, which decisively made everything much, much worse. So I switched to a B complex vitamin. That did nothing. So I upped my B vitamin and added half a Unisom tablet. That did nothing, and my appetite was proceeding to fall. Drinking was progressively harder. Yet again, I upped my dose of the Unisom and B complex. Nothing. I used Psi bands and Preggie Pops and various other suggestions. I ate crackers before my head left my pillow. I did all the Old Wives Tales. Nothing helped. Some of them, actually, made things worse.

Fast forward to 7 weeks, and I'm in the emergency room. I'd already been getting weekly infusions at the infusion clinic. My doctor had attempted to get me Diclegis, but my insurance company refused to cover it. So I went to Phenergan. I was on a small dose of Phenergan and I was taking it every 3-6 hours. By the time the ER visit came around, I was maxed out on Phenergan. At my ER visit, I got more D5 for my low blood glucose and more LR to hydrate and replenish some electrolytes. I was unable to hold any food down for 5 days and unable to hold liquid down for 3. I threw up everything, even my Phenergan. My urine had ketones (over 80!). My potassium was 3.1. My bicarb was 17. All signs pointed to my body eating itself to stay functioning. An MD and a PA and I had a little fight over admitting me, and ultimately I convinced them to let me go home if I kept some water down.

This is just a small aspect of my story. I have hyperemesis gravidarum. I've had more than 16L of IV fluids in the past few weeks. I've had homeopathic medicine. I've had OTC meds. I've had Phenergan. I've had 3 different IV medications.

Recently, I started throwing up my Phenergan. I now weigh 126lbs. I've lost 16 lbs. I feel my body physically breaking down. And now I'm on Zofran.

And now I get shit from people? No. Fuck off. My baby needs this medicine so she/he can have some fucking nutrients. Most of the risks of Zofran are not even an issue because my baby's palate has already been formed and my baby's heart is already four chambered. So, kindly fuck off. I'm gonna eat a meal for the first time since October. 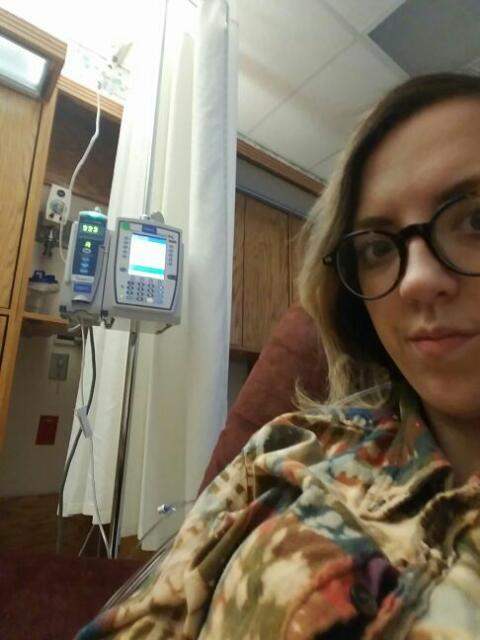