The decision was made to induce labour January 2nd at 40+1 weeks due to high blood pressure, extreme swelling, and the large size of the baby. I had the gel inserted at 8am Jan.2nd to cause dialation. I had a second dose of gel inserted about 6 hours later, around 2pm. By the next morning I still had only minor contractions and was only dialation to 2 or 3cm. So at 8:30am Jan.3rd they started me on Pitocin drip and broke my water. By lunch time the contractions were getting very strong. By mid-afternoon they were very strong and long. I was still only 3cm dialation. I was offered an epidural and they called in the anesthesiologist about 6pm. From this point a lot happened. The first epidural he gave me did not work. He was a very nice man, and very excited to help me get rid of the pain so honestly I felt bad for him as he kept apologizing to me. The second epidural he gave me partially worked (just my right side), this is when the pain got ridiculous. All the pain was concentrated to one area and hurt way more then before the epidural. The contractions were coming on top of each other at this point and I was still only at 3cm. He tried a third epidural which also only worked on my right side. They called in the OB at this point. The OB told me that I was looking at another 10+ hours of labour to deliver naturally. They gave me the option of a spinal, but warned that it would only be effective for 2 hours, so I would have to go through several spinals over the next 10+ hours. In my head , after 3 failed epidurals, I don't even believe that the spinal will work. The other option is to have a c-section. My husband and I talked about it, his opinion was that it was my choice but he couldn't stand to see me going through all the pain and jabs in the spine. I was worn down and in terrible pain and I took the c-section option. I never made it past 3cm. My nerves were shot. I was shaking and puking on the way to the OR. When they gave me the spinal for the c-section I told them I could still feel pain, they said that it was probably just my nerves from all the failed epidurals, but they said they could give me general anaesthetic. I said yes. The last moment I remember is the monitors flashing, my heartrate dropping, and my husband being told to leave the room. He was protesting and asking what the hell was going on as I breathed in the gas and went to sleep.

I never got to hear her first cry, or be the first one to hold her. That will always bother me. So much seemed to happen so fast.

When I woke up they told me she was 9lbs, 15oz, and likely would have had to had c-section even if I tried to labour and delivery vaginally. Then they told me my husband was eager to see me. They let him into the area outside the operating room that I was lying in, barely awake. As soon as he saw me he burst into tears, ran over and kissed me all over my face as his tears dropped over me saying 'I thought you were dead, they wouldn't tell me what was going on. Don't ever do that to me again'. It had been about an hour and a half since they kicked him out of the room and he spent that whole time worrying that I was dead and that they wouldn't tell him.

Ellison Jean Nancy was born Jan.3rd at 10:52pm. 9lbs,15oz. She was the first born to that small hospital in 2017 and made the front page of the local newspaper. 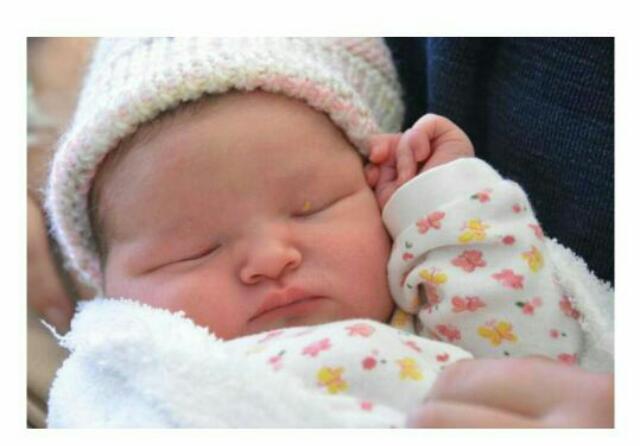