I was due to be induced today due to medical reasons, so it wasn't a surprise but every birth story is different so here's mine! Came in to the hospital at 730am, got admitted and the doctor broke my waters first thing. Then I was given oxytocin through an IV, with the dosage upped every so often. Contractions started getting uncomfortable around 2pm, and the anesthesiologist was on the floor so my nurse decided to get mine done as well as a couple other moms. Spent the next few hours incredibly numb, like unsettlingly so. Apparently everyone reacts differently and I was like a sack of potatoes from the waste down, hubby and the nurse had to move me like a rag doll everytime we repositioned to avoid pressure sores. Anyways at 4pm nurse checked my cervix again (came in at 1cm) and I was 4cm. I literally was feeling nothing, it was so weird lol. My ob was due to start her shift at 5pm, so the one that I had been seeing during the day came in the check on me one last time at about 450. The nurse said that she kept losing his heartbeat with the r hilarious monitoring so she asked him if he could put on the one that goes on baby's head. He says sure and they flip me , he sits on the bed, looks at my vag and says well no wonder, his head is right there. We're having a baby! I went from 4 to 10cm in about 50 min, it was crazy. So anyways they're rushing to get ready and my hubs is helping hold my legs and he's looking in shock and he says, holy shit hes coming ! Maybe 2 mins and 3 tiny pushes later our son comes out! It was so incredible, I was able to see most everything and they placed him on me and that was that, I'm in love. He was born at 5:02 pm, 6lbs 11oz and 19.5 inches long, hes so perfect.

We named him Oliver! 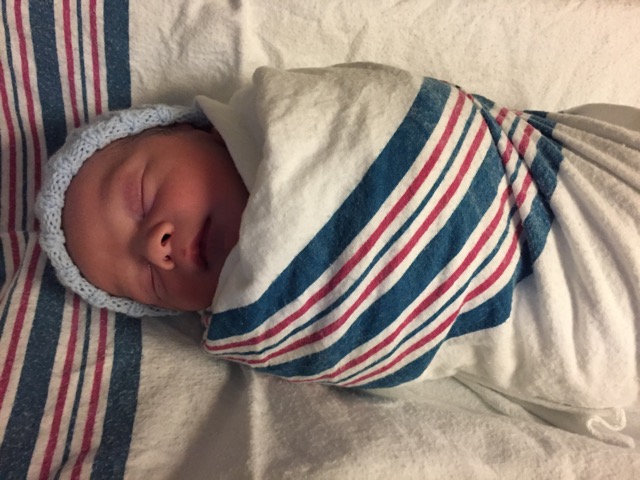