Would you be upset or am I️ overreacting?

Okay so here’s some back story. Yesterday (nov. 17th) was mine and my boyfriends anniversary. All I️ asked of him was that we would hang out together all day and just rest and spend quality time with each other and our newborn. So all week he promised me that’s what we would do but that he wanted to still go to the gym that day. At first I️ was hesitant because he goes every day and then goes to his brothers house and hangs out and smokes for hours with his brother and friends. But I️ said “okay just promise me you’ll meet them at the gym instead of going over there before and after.” So he promised. Which I️ lowkey knew was bullshit but he promised so I️ had to believe him.

*side note* he has never given me any reason to believe that he would keep his promise and not take 8 years. He tells me every day he will be 2 and half hours tops but ends up being 5-6 hours while I️ sit at home with our newborn.

So yesterday rolls around and he starts off the day by wanting to go get a haircut but I️ didn’t care because I️ was up all night and wanted more sleep anyways. Oddly enough the haircut (and smoking) took 2 hours.

*another side note* he always smokes pot before going somewhere and then sometimes on his way back. He has to go to his old place to smoke because I️ don’t want it in my house or around my baby.

So after his haircut he comes home and says he’s hungry and wants to go get food with me so my mom decided she’d watch our baby. We went out, got some noodles and company and went to Walmart to get something our baby needed and then we head on home. We get home and sit there for a little and I️ accidentally fell asleep for 20 minutes when I️ woke up he was leaving. He said he had to go and I️ asked if he was meeting them at the gym. He told me no that he’s going to smoke with them first. I️ got annoyed because I️ knew it was going to take longer but I️ just said ok. He told me he’d take an hour and a half tops (so by 9:45 he’d be on his way back from the gym) (we agreed on this time) 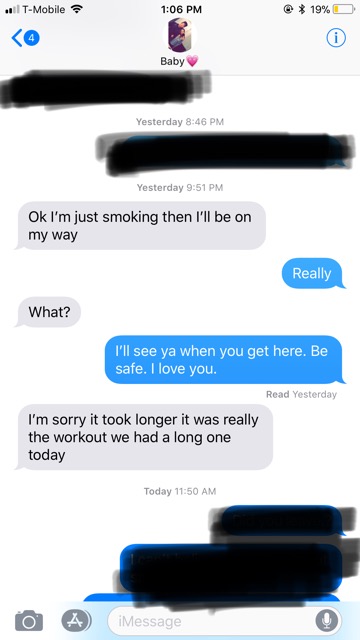 I️ wasn’t mad that it was 6 minutes after the time, I️ was mad that he was smoking and I️ knew it was going to take forever. But I️ hate getting angry over text and yelling over text because I’m so scared something will happen to him on the way home and those would be my last words so I️ didn’t yell or get mad but I️ typed it in the way that he knew I️ was mad.

So 20 minutes later he calls me and says he’s at the gas station and wanted to know if I️ wanted anything. I️ told him I️ wanted a drink but with the pebbled ice because it’s my favorite. He told me no because he had to fill up and it would melt (his old place is literally 10 minutes away). I️ didn’t argue and said okay assuming he’d be on his way home. And hour later and he walks in the door. Damn was I️ pissed. I️ looked at him like

He said sorry it took so long. I️ said it doesn’t take an hour to get a drink and get back. So he then tells me he went back after getting stuff at the gas station and got “talked into” playing COD with them. So basically he knew he was going to but lied about pretty much everything. I️ was livid because all I️ wanted to do was spend time and have a movie night and just hang out. I️ never complain about him going out and doing stuff because I️ get being stuck in a house all day isn’t fun but I️ just wanted this one thing from him on our anniversary and he still couldn’t keep his promise. He has yet to apologize for lying because he thinks he didn’t lie and that he did nothing wrong. Is he right? Did he do nothing wrong? Am I️ overreacting?

Sorry for how long is it.