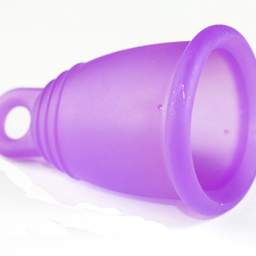 Menstrual Cup Users
For Cup Users, this group is for tips, stories, and questions, no matter what brand.

It looks daunting at first, bc it's bulbous shaped, but most of that doesn't expand when inside you. The material is softer and has more give than most other cups.

I have tried both the lunette model 1 and Lena small cup. They both felt pretty similar to each other. The Lena cup has prettier colors imo. With both of these, I felt around the cup when it was inside to make sure that it was fully opened, and it was, but still I had leaks. Every time I went to the bathroom and wiped, there would be a small tinge of blood, no matter if the cup was full or not. It's just a little bit of blood, enough to stain your underwear, but not your pants. But the femmycycle cup left my underwear and toilet paper free of any blood stains all day! I'm impressed. It's still just my first day using this new cup but the results are promising so far that this will be a pretty reliable cup. Which is awesome :)