Kendra • Tue, Mar 20 • "No one can make you feel inferior without your consent." ~Eleanor Roosevelt

Hi guys. I didn't know where to post this and it's kind of long so just bear with me. We had a sweet baby boy named Henry Diesel. He is a red nosed pitty and is the most perfect dog you'd ever meet. We currently live in a 1 bedroom apartment and are about to move to a 2 bedroom in the same complex. We rescued Henry from a dog fighter and he came to us with a lot of problems. Over the months one by one we've improved his mental and physical state alot. All of his aggression is gone, his anxiety has greatly improved, he's happier and his weight is up, he plays and bonded closely with our female pitty. Well these past few months his anxiety has gotten worse again. He started shredding things, he barked at every noise, he stopped eating as much, he stopped minding, he basically turned into a fearful miserable dog and he soon fell into an obvious depression. He would just sleep all day when he wasn't barking at the noise from our neighbors. We tried the vet who referred us to a behavioralist and she wanted $300 just for a consultation. She is the only one near us and is nearly an hour away. We contacted others that were further away and they were all way too expensive. We had to choose between a behavioralist or fertility treatments. Henry grew worse but was still a very loving dog. Then kids started coming around the dog park. He snarled at them and barked viciously. He was petrified when he once loved kids and babies. Jake and I knew that he was under too much stress and if we had a baby he'd be under even more with less attention and constant screaming coming from an infant. We sat down and discussed our options and it came down to Henry or a future child. We fought and fought and realized that he just wasn't happy here. We weren't the right family and we were about to become the worst family for him. We can't live our lives without children so we agreed to rehome him. We posted an ad and before we knew it the perfect family responded. (it wasn't even 24 hours later) We were shocked and didn't want to let go so soon but we knew they'd be the best family ever to him. The woman ran a pitbull rescue and her sister is a vet and her aunt is a dog trainer. They have a big house in the country with lots of space and great neighbors who habe dogs who love to play. He would have his own room and great food and lots of toys. She had three older kids in their teens (one was an adult) and didn't want anymore children. She has no other pets and wanted a companion. She's home 24hrs now so he'd have all the attention in the world and they pull in $100,000 a year. They fell in love immediately and with heavy hearts we agreed to let them have him. He was having so much fun there that when we said goodbye he didn't even care. That dog has been so codependent on us from day one that we were hurt. When he realized we were leaving he stood at the door and looked at us for a moment then just walked away and laid down on their couch with his new daddy. (he chose him as hus person immediately) He hates tall men and hats yet loved that man instantly. They agreed to send pictures everyday and updates frequently and she wanted him to come visit us soon so that he could see his sister and we agreed. He was my husband's dog. They leaned on each other for support. We left and in the middle of the night around midnight I still wasn't asleep. I was in tears because I missed my baby boy. He is my son, my child and I gave him away! My brain knew it was for his wellbeing and happiness but my heart wanted him here with me. I texted her asking for him back and at 5am she sent me pictures of him and said i could have him back and she knew how hard it was. I looked at those pictures and instantly changed my mind. For the first time in months he was smiling. He was wagging his tail. He was playing. He was eating. He was dancing. He was happier without me. I knew i couldnt bring him back to his unhappiness so i told her i changed my mind and we wouldnt ask again. This was after a long discussion with my husband. He felt the same. He couldn't sleep and was crying and he wanted him back. After awhile he saw what I saw and knew the same thing. He needed to be with that family. They are his true forever family. My female Grace is distraught. She's having liquid diarrhea and she's lethargic. She had been crying all night and just curls up in our arms shaking. Yesterday my husband stayed home from work to deal with his grief. We were shown tons of pictures of him meeting the neighborhood and he was walking offleash and just having a blast. I said when we get a house and are better off we will get another dog. He accused me of trying to replace Henry. I denied it and he said that Henry was his dog and i took him from him.....Continued in comments. 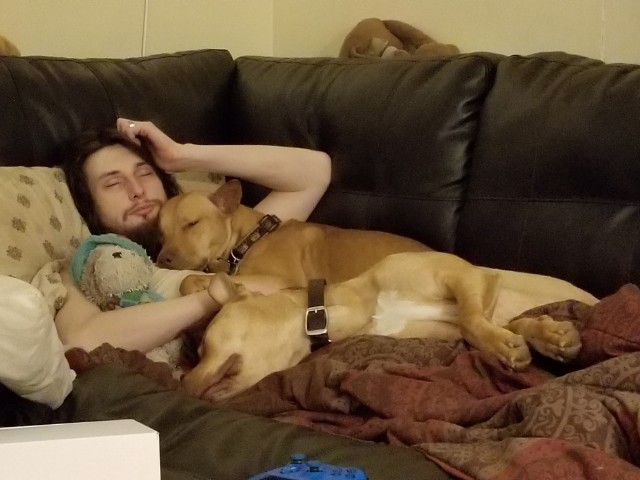