My husband is away at Army training, and I want to have sex but can’t because he’s not home...so I decide to try to talk dirty to him and lay into the fact that I’m hungry because we don’t really have much food at the moment here at the house, long story for that. Anyhow, I tell him the only thing we have to eat is sausage but I’m not in the mood for pork sausage. The joke goes right over his head as we’re talking on the phone so I message him, trying to explain what just went right over his head. All the while he’s telling me that it’s about time that I don’t like pork anymore. So, Then send the second message, by that point I’m flustered because I have to explain what I’m trying to do over the phone but don’t want to say I want your dick over the phone where someone might hear it. He then proceeds to tell me on the phone “oh! I want you to eat it.” The last message is my response and I made him cry. I feel bad but I’m pregnant and moody af right now. Plus not to mention his response to my second message was a complete turn off. 🤦🏽‍♀️ at least he comes home soon where I can cuddle with him again and not go through dick withdraw 🤷🏽‍♀️🍆 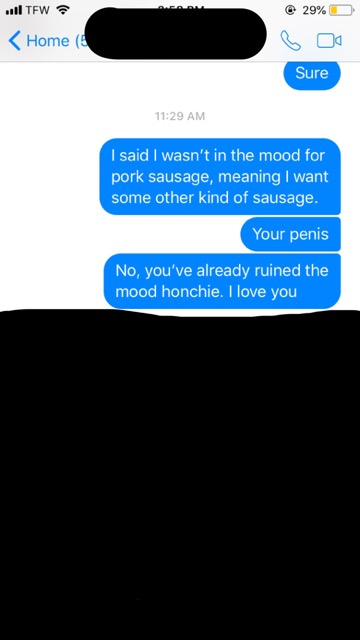