I may not have been educated enough going into having a c-section at 37 weeks but wouldn't wish my experience on anyone.

My c-section was scheduled for 8am October first. Everything was going well, I got my epidural and was being prepped for my baby's arrival. The surgery started without a hitch and roughly 15 minutes later my little boy was here.

They removed my little boy without any issues and took him to get him cleaned up and he wasn't holding his o2 sats higher than 90. They put him on oxygen for different times and then had to move him to the nursery to place a cpap. His daddy went with him.

I was laying there clueless. They brought baby to show him to me and then went away. I cried and just wanted my baby.

I was moved into recovery and was finally updated that my guy was doing ok but still having breathing trouble. Thankfully my bf asked how worried he should be and they said this was very common based on him being early and a c-section.

I really feel like we should have been informed of what "common" issues could happen. So again two days later they noticed his billyruben levels were high. They were going to put him under the lights and decided he'd probably be better the next morning.

The next morning his levels were higher and they put him under the lights. I was asked if there was history of jaundice in the family. I said yes that I had it when I was born a month early. They said oh, well that's why he has it then. 😕

We were told he needed to eat more to get rid of the billyruben. I obviously wasn't producing enough colostrom/milk to help so we asked to supplement with formula. We got a lecture on how terrible formula is. My thought process was oh f'n well, he needs to eat to get healthy.

I know this is long but I am still blown away by the way we weren't communicated with and the way every situation seemed to be a cluster f*.

Our baby is healthy and happy. He had his one week appointment yesterday and is all good!

This was Friday morning when we finally got home! We were in the hospital two extra days, two very long days.

I love my little guy so much. He's my life! Thank you for listening. 💙👶 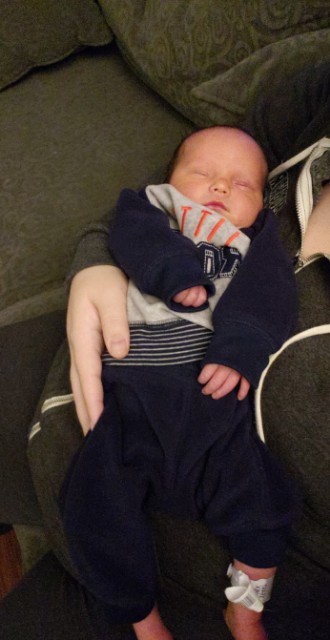