Thousands of people have demanded that Nike recall their Air Max 270 shoes, saying the shoe sole logo is offensive to Muslims.

A Change.org petition, titled “Nike Needs to Recall Offensive Show With Allah’s Name From Worldwide Market,” has gathered over 11,250 signatures as of Tuesday evening. Started two weeks ago by U.K. resident Siaqa Noreen, the petition argues that “the Nike Air Max 270 shoe with the script logo on the sole resembling the word Allah in Arabic will surely be trampled, kicked and become soiled with mud or even filth.”

“It is outrageous and appalling of Nike to allow the name of God on a shoe. This is disrespectful and extremely offensive to Muslim’s [sic] and insulting to Islam. Islam teaches compassion, kindness and fairness towards all,” Noreen wrote on the petition’s home page. “We urge Nike to recall this blasphemous and offensive shoe and all products with the design logo resembling the word Allah from worldwide sales immediately.”

The petition also claims that Nike had already recalled trainers with a similar logo, depicting the word Allah, in 1997, and questions why the company has allowed the same controversy to happen again.

Although Nike did stop selling a line of shoes in 1997 after it came under fire for having a flame-shaped logo resembling the word “Allah” in Arabic script, the American multinational footwear, apparel and equipment corporation has taken a different approach to dealing with the backlash over the Air Max 270.

In a statement, a Nike spokesperson told Newsweek that the logo is merely the Air Max brand stylized differently. "Nike respects all religions and we take concerns of this nature seriously," the spokesperson said. "The AIR MAX logo was designed to be a stylized representation of Nike’s AIR MAX trademark. It is intended to reflect the AIR MAX brand only. Any other perceived meaning or representation is unintentional."

The news comes after Amazon pulled over a dozen products from its online marketplace earlier this month over concerns, raised by the Council on American-Islamic Relations (CAIR), that they were offensive to Muslims. "All sellers must follow our selling guidelines and those who do not will be subject to action including potential removal of their account," an Amazon spokesperson told CNN. "The products in question are being removed from our store."

GettyImages-1027343424 People walk by a Nike store in Manhattan on September 5, 2018 in New York, New York. More than 10K people have signed a petition asking Nike to recall its Air Max 270 shoe because its logo is offensive to Muslims. 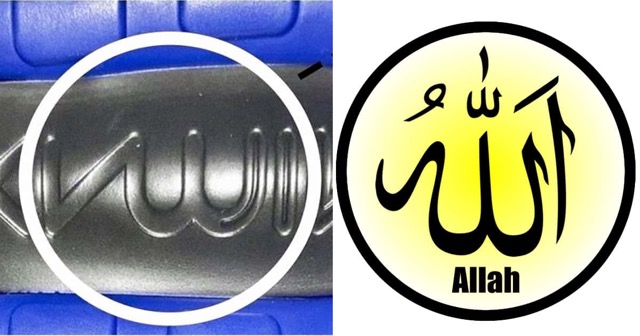 When the logo is upside down, it closely resembles the Arabic word for Allah.

Do you think this is a legitimate concern for the Islamic community, an oversight by Nike? Should they recall the shoes? Apologize?