My Birth Story With a Few Plot Twists!

Trigger warning: Pain and small complications but everything worked out how I had prayed and planned.

Also, this is probably going to be long as I wanted to share the full experience for anyone curious.

Reason for induction: previously, I’d said it was due to my OB not wanting her too big to come out. Turns out I misunderstood as she was trying to be vague and not upset my anxiety. In reality, my baby had begun to run low on fluids and was getting too big to stay. Which was actually a miracle as for most of my pregnancy, she was too small.

On Wednesday at 7:30am, we went into the hospital. I was given a room, but there were questions as to whether or not I’d be induced as another woman showed up in labor and we had the same OB. Plus, it’s a small town hospital and not a lot of OB nurses.

For the last month, I’d been having contractions frequently. That morning, they’d completely stopped. That allowed me to be put on cervadil at 10:30 am. I started to have contractions again, they were about the same as I’d been getting. I started at 1/2 a fingertip dilated, 90% effaced, -1 station. By the end of 12 hours, I was at 1 finger tip dilated. They let me rest before Pitocin the next morning.

(BTW, other momma had to have an emergency c-section due to baby’s heart rate dropping. She had a beautiful baby boy!)

At 8:30 am, they started me on a very low dose of pitocin. They wanted to try and copy a natural labor pattern as much as possible.

By noon, I was needing help getting through contractions. They were starting to intensify and were coming real fast. After about an hour and a half on the exercise ball, I was back in bed yelling so loudly in pain that I’m sure the entire hospital heard me. The pain was so intense that my body had reached its max and I was uncontrollably shaking.

They called the anesthesiologist over, they actually pulled him from OR to help me. I had to sit through 45 minutes of trying to get this epidural in my back. Because of how bad off I was due to the pain, I swear this man was more terrified than I was. His hands were shaking so bad it felt like they were vibrating and apparently he was sweating just as much as me.

This man inserted an epidural into my back 7 times. SEVEN FREAKING TIMES. By far, this was worse than giving birth. I had maybe 30 seconds to a minute between contractions. The only thing that helped me through was when my nurse would remind me to do this for my baby. I was amazed at how well that helped since I’d struggled to bond with her while pregnant.

After the epidural was finally in place, I could breathe again. I could move my legs, they felt like they were heavy and had fallen asleep. I couldn’t feel any pain from my hips to my ribs. I only felt pressure in that area when I was aware of what was happening.

I was told after my epidural I could take a nap and relax. My OB came in to check my cervix 30 minutes after the epidural. Within that time I had gone from a 1 to a 10 and needed to start pushing! My response to this news was “I haven’t even taken a nap yet! My water hasn’t broken!” To which they responded, “uh, we just broke your water hun”

At this point, my OB had ANOTHER patient that went into active labor at the same time as I did. She was expected to give birth first so, my OB headed over there with my nurse and I was left with 2 nurses I didn’t know and told to wait and do practice pushes. This is when my baby’s heartbeat began to drop.

They called in another OB, he didn’t even bother changing clothes or taking his phone out of his pocket. It was straight to deliver my baby. The monitor wasn’t picking up my contractions and the only way we could tell was when my baby had her foot pushing against my ribs. So while she pushed up, I pushed down.

Within 30-40 minutes, I had a baby plopped down on my stomach and the placenta came out entirely seconds later. My fiancé held my leg, watched everything, and cut the cord. I had an episiotomy as well.

Baby scored a 9 on her APGAR. Weighed 5lbs 14oz, and I ended up delivering 20 minutes before the other momma. Who gave birth to a baby boy.

I’ve been lucky with recovery. Our daughter already has us on a schedule, she sleeps no less than 3 hours at a time, barely cries. We are blessed.

As far as postpartum recovery, it’s been 2 1/2 days and I’m barely bleeding. Was able to go #2 same day as delivery. All my pregnancy skin irritations are healing up.

And while I do have my anxious mom moments and my hormonal moments, I haven’t shown any signs of PPD as of now. My fiancé has actually told me that I seem happier and more calm than he’s ever seen me before. For someone who is a high risk for PPD and has had depression and anxiety most of her life, this is a relief.

Now, enough about me. Here’s a photo of my precious baby girl💕 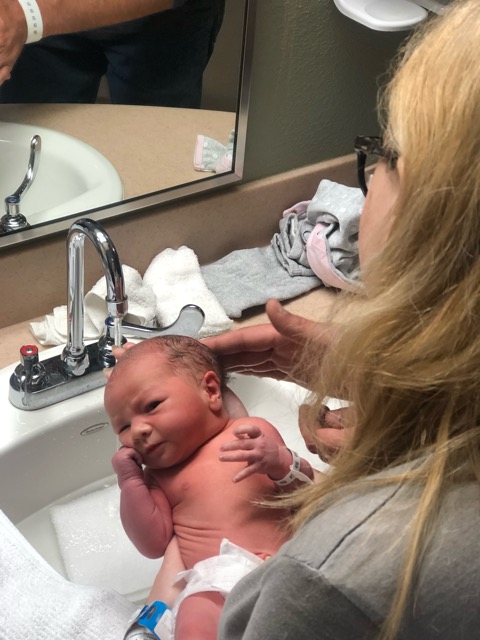 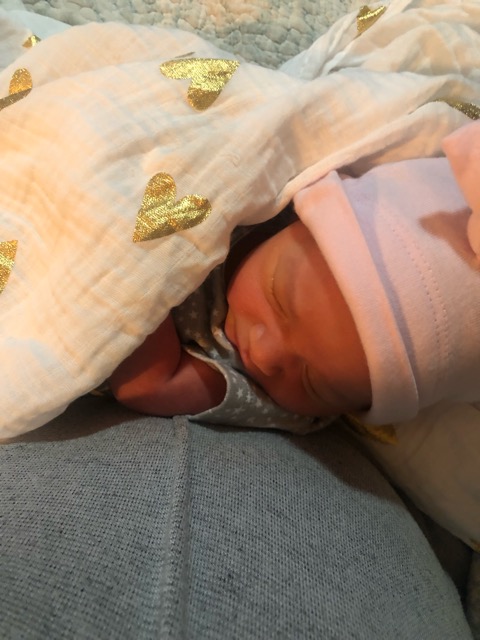