So I don't know how many have read about this story, but I'd like some opinions.

A recap: President Trump is planned to attend a meeting/ceremony in Poland in early September. He then mentioned as a side comment on a tv interview, that he might go to Denmark after. This came as a big surprise, as there was no current plans for that. Critics say he invited himself. Danish government come out and say that as a leader of a long term NATO allied state he is of course always welcome. The Danish Queen sends an official invitation to a state visit and Trump accepts. Preparation of the visit starts.

Then there's a leak about that Trump has said in meetings that he wants to buy Greenland off Denmark. Danish prime minister calls such an idea absurd, and reminds that Greenland belongs to Greenland, not to Denmark as it's an autonomous Danish territory.

Trump confirms in another interview that he does want to buy Greenland, saying "Essentially it's a large real estate deal", but it is not his main priority for the state visit.

There's obvious reasons why Greenland would appeal to Trump, greater American military presence in The Arctic, natural resources etc. And who knows what will be revealed with global warming meeting the ice.

Lots of negative reactions in Denmark and Greenland following all this. Lots of snipey comments. Demonstrations are planned, the Trump-baby blimp from London is ordered. 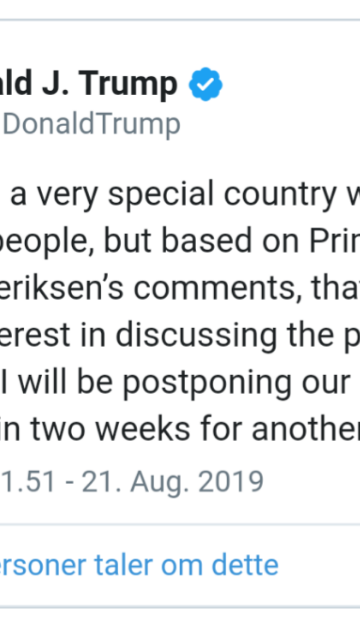 Trump references directly in a tweet that he has postponed the meeting because the Danish pm refuses to discuss a Greenland sale. The Queen also gets an official cancellation, hours and hours spent on expensive preparations are wasted. The Danish tax payers will have to pick up the bill. The diplomatic relationship is at an all time low as the cancellation is seen a a great insult.

So, what are your opinions on this situation?

Is it just a small misunderstanding that doesn't matter?

It's it a terrible diplomatic faux pas by Trump?

Is it relevant that Trump invited himself or not?

Was Trump just seeing the situation from a business standpoint, and he got misunderstood and bullied with snipey comments?

Is it fair to cancel if you don't feel welcome because of comments, demonstrations etc?

Does it not matter what people, government, diplomatic relations in Denmark think, as it's a tiny country with only 5.8 million people?

Does it matter that now the reactions are even worse than if the visit had just gone on as planned?

Is it just one of those "Well, Trump is silly and irrational, doesn't follow the rules, he can't help it, we will change him soon" excuse for the situation, or is it a wider issue?

Is the idea of buying and selling land and citizens, like in colony times still going on?

Just want to add that there had not been any mention of any security risk as a possible reason for cancelling. The placed protests were peaceful demonstrations.