Things started off perfect. He was a sweet, single father and I was a young single mother. I was friend’s with mother. We worked together. He was so passionate and super nice, packed my lunch. Dropped me to work. Picked me up whenever. You couldn’t ask for a better boyfriend. Fights wouldn’t be a thing. I’d hang up the phone. He would call me back non stop and we’d make up with some drinks and great sex. Lol. It started about a year and half in. I blame his addictive personality. He experienced with drugs in the past which I knew but it was exactly that. The past. We were all young and dumb once. So I didn’t judge. It has showed up again. Which on recreational use I still don’t mind. But what I do mind, is the stalking behaviour. I lost my job twice because he would show up all day at my job due to paranoia. I haven’t been out without him since over a year ago. I don’t see friends anymore. I don’t see family really either. He will drop me to my parents house if I want but he will have to stay. I can’t stay over alone which is what I want. I want to be away from him for one frickin day. I do mind being slapped in my mouth on his birthday. He moved me into his parents house and it is hell. They stress him out. They stress me out. He lost his job and constantly begs his parents for cash. I try to leave when he’s asleep and they will persuade me to stay. His mother hates me now. She barely speaks to me. I told her it was his fault I lost my job with her. He wants us to have a job together or not at all. Our fights got more intense. We win some. We lose some. That’s how they are. His son says I’ve changed him. His mother says I’ve changed him. I feel guilty for enabling him. But nobody knows what I’m going through. I’m the one who gets shoved, I’m the one who gets their things destroyed. I’m the one who can’t have a day to herself. Everyone sees me as the bad one and I’m the one suffering in silence. I haven’t seen my mother since July. She hates him. She hates his family. If I leave I will have to do it when everyone is asleep. I’ve tried and always return. I’m in no immediate danger y’all. No worries. And neither are our children. They don’t live with us. I’m mostly just venting. I’ll edit if I can. This picture was a message from his son on Instagram. I didn’t notice this message until after. So his dad got it first and didn’t let me know. 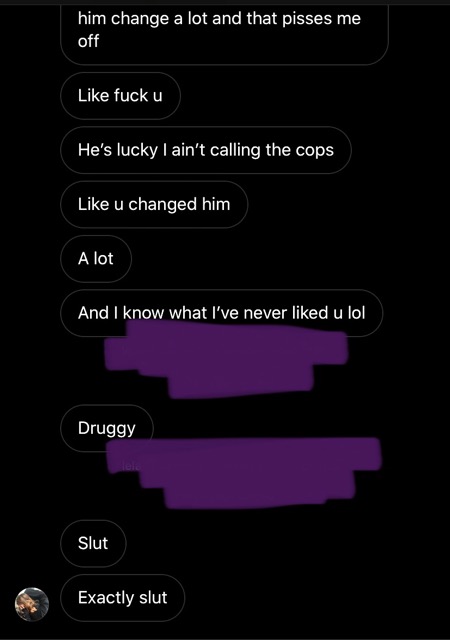 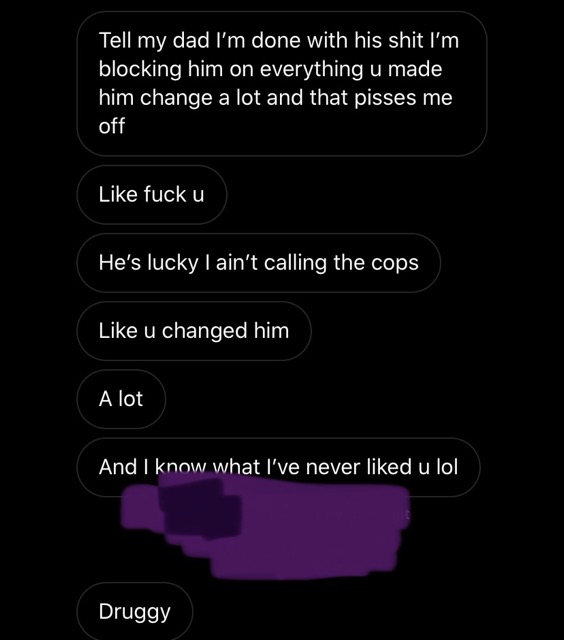