Can you tell if someone is rich or poor by looking at their face? 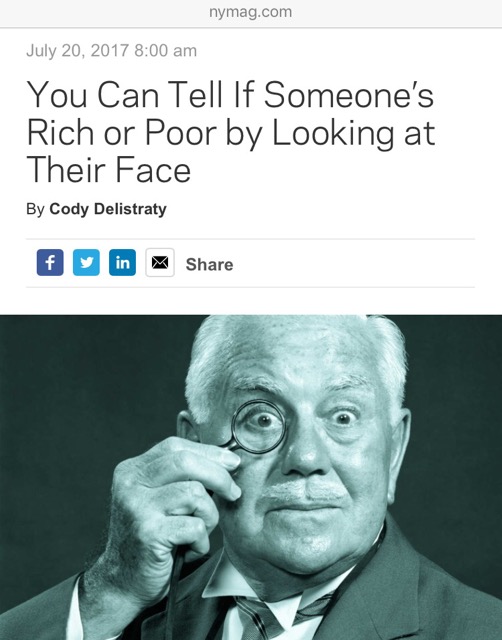 Throughout the late 1960s and 1970s, the English artist David Hockney painted a series of “double portraits,” two subjects depicted side by side — of the fashion designer Ossie Clark with the textile designer Celia Birtwell; of the author Christopher Isherwood with the artist Don Bachardy; and one of his own mother and father, among others. For nearly all of them, critics especially applauded Hockney’s ability to convincingly paint faces, capturing both emotion and a sense of mysterious intimacy.

The one exception to these sympathetic, evocative depictions, however, is a painting titled “American Collectors (Fred and Marcia Weisman),” in which the Weismans’ faces are slightly blurred and blunted to appear similar to the statues behind them. It’s not an obviously negative portrayal, exactly, but to most viewers, it seems clear that Hockney perceived his subjects as flat and dull, their faces signifying their well-bred background and high social class but also their utter lack of original artistic discernment.

The ability to convincingly and subtly depict social class through one’s face alone is a rare skill — not everyone can be David Hockney — but the artist was also tapping into something more universal: Research suggests that the face alone might provide clues to someone’s social class, especially for those who know how to look.

Generally speaking, we pick up hints on a person’s socioeconomic status by looking for more obvious markers, things that are buyable or learnable —clothes, watches, comportment, manner of speech. (Just think of the line in The Great Gatsby when Jay Gatsby turns to Nick to proclaim that Daisy’s “voice is full of money.”) There are subtler, academically proven cues, too, like the fact that someone from a higher class tends to be more disengaged and aloof when dealing with someone from a lower one.