A little heartbeat and announcing to the grandparents

So after trying for 12 months with only 6 super irregular cycles (from 27-83 days), I decided that I was going to take a break from actively tracking. It wasn't doing my anxiety any good.

I stopped temping and checking my ferning microscope. I did still keep track of BDs and if I noticed anything in particular like my CM or how I was feeling.

About 3 days after the 1 year mark, I must have ovulated! All it took was 1 spontaneous BD in the space of a *week* after months of "I'm fertile, let's get it on".

On Christmas <a href="https://play.google.com/store/apps/details?id=com.glow.android.eve">Eve</a> I started getting all emotional at church, teary and sad and super anxious. I also noticed I'd gained 2kgs (water weight) and was super bloated for the few days before that.

Christmas Day was good, then on Boxing Day, my boobs were getting to me, I was starting to pee more, and the clincher was that my shorts didn't fit my butt like they used to.

I was looking at it in the mirror and said to my husband, I think we need to buy a test!

So we did. And I expected it to be negative. But then I checked it and saw a SUPER faint second line. He walked into the bathroom to find me staring at this little pee strip going "it's not totally negative!!"

We went out with my sister and BIL that night and had our lovely little secret between just the two of us.

Because it was so faint and I'd bought a 3 pack, I tested again the next day, and the day after that. Still faint, but darker - still positive!

The day after that I was SO sick with what turned out to be sinusitis, my sitting heart rate was 123. Off I trotted to see the Dr, said I have sinusitis oh and by the way I'm pregnant, it's very early, but I'd like bloods and a USS (ultrasound) referral to confirm. 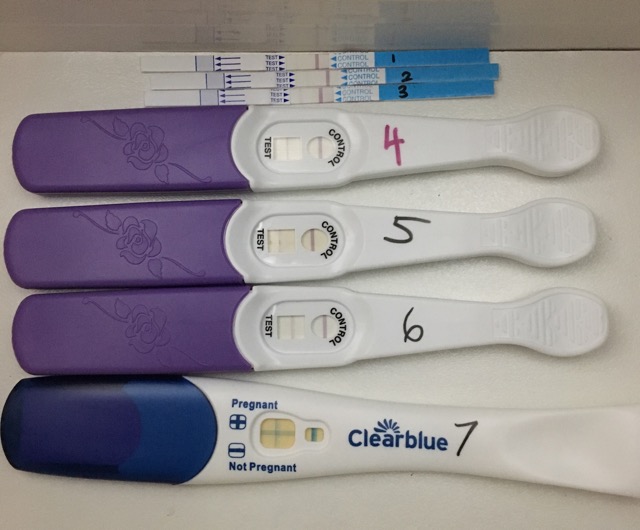 This was all over New Year's, and on NYE I told my best friend, because my due date according to my guess at ovulation was her wedding date!! Turned out she hadn't been feeling too well, and that night we found out she's pregnant too! About 10 days ahead.

The Tuesday after New Years, I had to have a repeat blood test to make sure my hug levels were increasing... a few days later we found out they definitely were!

Cut to yesterday, I had my first USS - my husband got off work a little early to come with me, and we saw a little bean, measuring at 6+2, with a beautiful little heartbeat going at 120bpm. It was amaaaaazing. 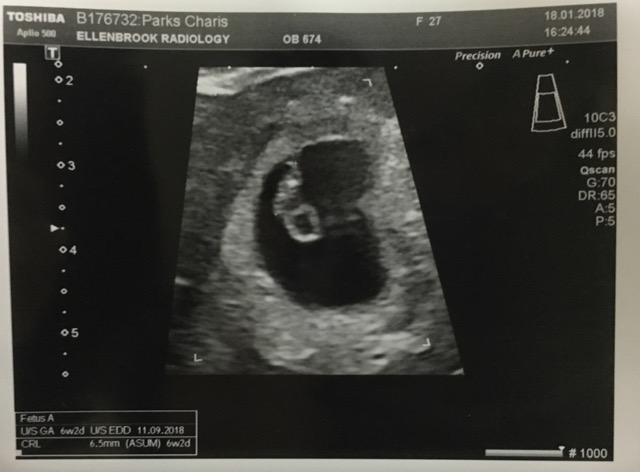 Finally, the time came to tell the grandparents. 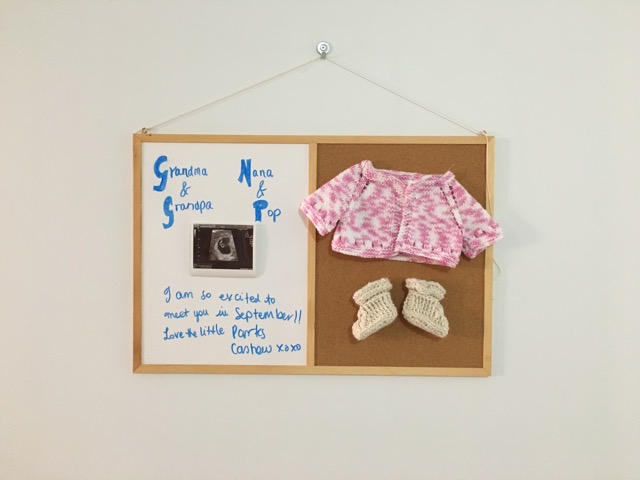 We had them all over for dinner, and because I had been making a few baby clothes already (for both boys and girls haha, it's FAR too early to tell), my husband put together this cute little board and got me to write the sign.

Let's just say the women already had an inkling, I'd accidentally spilled it to my parents anyway, but my FIL had NO idea and was so chuffed, he just kept walking around with this giant smile on his face going "well done you guys!!!"

Currently sitting on the toilet floor, hoping for relief to come, but it'll ALL be worth it