On January 31st I took a positive pregnancy test (well, actually 4 positive tests lol). I was standing in the bathroom in awe of those two little lines. Excited, nervous, anxious, in love...so many emotions flooded my mind when I realized we’d be parents to a sweet baby in 9 short months! I previously had two little onesies made so I could give them to my husband whenever the time came that we were pregnant. When he

came home that night I had the tests and onesies ready for him in a gift bag—i was so nervous to hear his reaction! He opened it and realized right away what was happening and we both sat there and giggled because it didn’t feel real. That night we prayed for a healthy baby and a safe pregnancy and for guidance as we started into this new season of parenthood.

The day after I hit the 6 week mark I started bleeding. No pain or cramping, just bleeding..For 5 long days. I called my doctor first thing that morning but it was a Saturday so no one was in the office so she had me come in on Monday the 12th for blood work. The weekend took so long. I read some information on my situation and realized that there were many women who bleed in pregnancy who still have a healthy baby at the end of their pregnancy, so I had hope (plus i know the God we serve!!). I had blood drawn on Monday and again on Wednesday. Finally, the phone call came on Thursday. At this point I was done bleeding so I didn’t know what to think about the results of the situation. Well, my Hcg levels (the pregnancy hormone) on Monday were already 5.7 (extremely low!!!) and Wednesday they were negative.

We’ve cried tears and had broken hearts but in the end we know that God will give us a baby in His time! I feel so blessed to have been a mom for those 6 weeks and have tears in my eyes as I write this, as I never thought I would be sitting here at 22 years old writing about my first pregnancy ending in miscarriage. We don’t blame God, we know only the enemy comes to kill, steal and destroy (John 10:10). We are okay and excited to see what will come in this next year!

I now feel like there was a reason I decided to have two onesies made instead of one...even though God wasn’t the one to take our baby, I feel that the two onesies have significance. One to signify the life that was lost, and the other to represent the baby God will give us someday (hopefully many babies in the future)! We didn’t get to find out if our baby was a boy or girl but they were certainly loved!!!! By their grandparents, and all their aunts and uncles and even great-grandparents. Even though we won’t be growing a baby in these next 9 months, i believe God will be growing our ministry and through that also giving us a child. My DH and I have grown closer through this situation and we hope this is a beautiful testimony of Gods love for us that will minister to others.

God always has a plan!! Prayers to all you ladies who have been TTC with no success...believing it will happen for us in 2018!!

For this child I prayed, and the Lord has granted me my request which I asked of Him. Therefore I have also dedicated him to the Lord; as long as he lives he is dedicated to the Lord .” And they worshiped the Lord there. 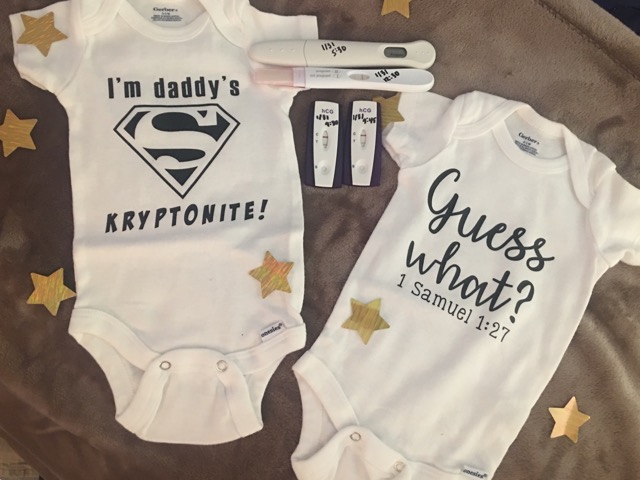